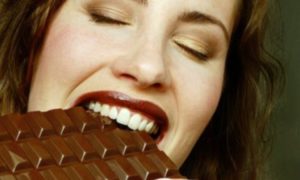 As Easter is celebrated on 27th March, many will be feasting on chocolate to mark the occasion. But despite the emphasis on the unhealthiness of chocolate confectionery, it seems consumers are turning to the treat as a result of its emotional benefits.

Indeed, new research from Mintel reveals that over one third (38%) of chocolate eaters in the UK say that the emotional benefits of chocolate outweigh any health concerns. What’s more, 24% of Brits say that they have bought chocolate confectionery in the last 3 months to boost their mood, whilst 16% have purchased the treat to get an energy boost.

Additionally outside of the UK, other European consumers value the psychological merits of the treat. Half (49%) of Polish chocolate eaters say they eat chocolate to lift their mood, followed by 40% in Italy, 39% in Germany, 27% in Spain, and 15% in France. What’s more, two in five (41%) German chocolate eaters say they eat the treat because it relaxes them, followed by 37% in France, 28% in Italy, 27% in Spain and 23% in Poland. 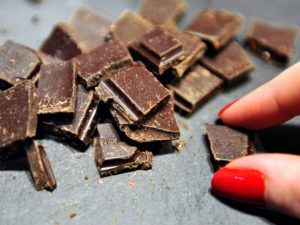 But it’s not only in Europe that consumers believe in chocolate’s healing qualities. Across the pond in the US 29% of chocolate candy eaters say that they eat the treat to improve their mood. And in China, where volume sales increased 6% between 2014 and 2015, three quarters (76%) of consumers that eat chocolate agree the eating the treat is good for lifting the mood and 64% agree that eating chocolate is an effective way to relieve stress.

Marcia Mogelonsky, Director of Insight at Mintel, said: “While chocolate confectionery may be considered to be a ‘guilty pleasure’, it is also a food that is strongly tied to emotional needs. This is likely the reason that consumers allow themselves to indulge in chocolate and other less healthy snacks. Even at a time when the importance of healthy snacking is being emphasized, the importance of chocolate confectionery as a psychological wellness tool cannot be ignored.” 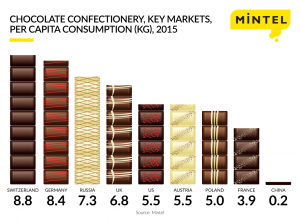 And it seems that this growth in launch activity follows strong consumer demand for quality chocolate. Approaching one quarter (22%) of chocolate eaters in France say that a product containing premium ingredients is an important factor when buying chocolate, followed by 21% in Italy, 17% in Spain, 11% in Germany and 9% in Poland. What’s more, one quarter (25%) of chocolate buyers in the UK say they would be willing to pay more for a luxury brand of chocolate for themselves, whilst 44% would be willing to pay more when buying as a gift.

“Given the extent to which consumers’ food knowledge has grown over the past decade, it is not surprising that they increasingly demand unique products that come with a stamp of authenticity. This is especially notable in chocolate confectionery, as consumers become more interested in cocoa sourcing, cocoa content and premium positioning,” Marcia adds.

“The growing influence of Asia as a source of inspiration continues to be seen in the chocolate industry. In 2012, wasabi was the ‘Asian flavour of note’ in chocolate confectionery. In 2015, matcha green tea took its place. Chocolate manufacturers are exploring the use of teas as an ingredient in confectionery, both because of the health benefits they claim and because of their flavour notes, which can complement different strengths of cocoa. While matcha is the best known right now, it is possible that other teas will gain attention and grow in popularity as chocolate confectionery flavours and ingredients as more research about their health benefits comes to light,” Marcia concludes.