By Newsroom on June 9, 2015Comments Off on Unleash Your #HungerCry for Free Yogurt with Naked’s New Danio Campaign

#HungerCry, Naked’s latest campaign for Danone, delivers danio yogurts as the answer to the four o’clock hunger so many of us feel. The digital based campaign will last six weeks beginning on the 8th June. As part of the campaign Naked will be working with a series of influencers across social media platforms who will encourage their fans to let forth their #HungerCry. Running in tandem with the digital campaign, a bespoke outdoor interactive element has been developed with Anarchy Ltd – a voice-activated vending machine which dispenses yogurts to consumers in exchange for their Hunger Cry. 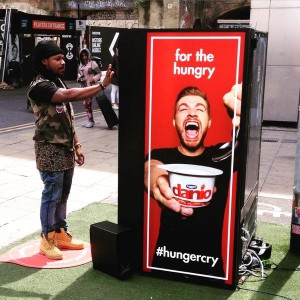 Challenging the typical yogurt branding, danio have identified a gap in the market with male consumers. “No yogurt is clearly targeted at men,” explains Niccolo Rigo, Naked’s Strategy Director for Europe, “even though they can represent up to 40% of a yogurt’s consumers.”

Discussing Naked’s approach, Niccolo continues; “At Naked we knew that in order to connect with a young male audience, the brand had to challenge all the conventions that surround the category and the way yogurt brands are expected to talk and act. This meant leaving the traditional territory of a feminine, healthy and natural moment of indulgence, and embracing a more disruptive, immediate and entertaining personality that is more in line with the world of male snacks. Lastly, we wanted the product to remain at the very core of the story – and so we designed an idea that is fundamentally about a consumption ritual. #HungerCry is the result of this approach.”

Research has shown that 4pm is the key time at which people begin to feel hungry and reach for a snack. danio want consumers to associate their product with being the perfect afternoon snack. In order to keep danio top of mind when hunger strikes, the campaign’s social media influencers, Arron Crascall, Ben Phillips and Anto Sharp, will produce a range of Hunger Cry executions. They will perform their Hunger Cries in a variety of unexpected public locations and post them on Vine, Facebook, Twitter and YouTube, challenging their followers and fans to do the same. 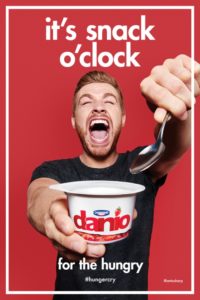 Naked’s Head of Creative for Europe, Cyrus Vantoch-Wood comments on the choice of influencers; “#HungerCry is a bold, social-first, comedic campaign and we needed influencers that have authentic laddish humour and charisma. This is a campaign that we want our fans to own for themselves. They had to be well-loved across the LadBible demographic, and it’s because of this that Arron, Ben and Anto were the perfect fit.”

The bespoke #HungerCry vending machine is not only a clever part of the campaign’s experiential channel but also works as a device to generate more content for the campaign. Footage of consumers using the machine and crying for danio will also be used across social media.

Cyrus Vantoch-Wood comments: “We wanted a disruptive and rewarding stunt that would not only be a brilliant talking piece experientially, but also generate a stream of engaging content for us through the hidden camera.

“Admittedly, we were nervous about how many would actually take up the challenge over the two days, but people were all over it with over 400 responses. Not bad for a reserved country like Britain. After the initial surprise, bystanders couldn’t help themselves and gave it a go. The tech is always a challenge. It was completely reactive to and responsive by sound, so adjusting the sensitivity to ambient noise required the most testing. On top of this, we had hundreds of LED lights inside the equaliser, meaning the machine was prone to overheating. It was a lot of hard work but we have a standout machine that’s now looking to tour the country.”

Unleash Your #HungerCry for Free Yogurt with Naked’s New Danio Campaign added by Newsroom on June 9, 2015
View all posts by Newsroom →