By Newsroom on October 24, 2018Comments Off on Walmart and Target Looking to Capitalise on Trader Joe’s ‘Two-Buck Chuck’ Success 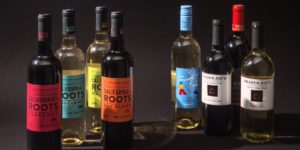 Walmart, Kroger, and Target are rolling out premium wines for cheap. They’re trying to copy Trader Joe’s success with “Two-Buck Chuck” and capitalise on America’s love affair with wine.

The big-box players have recently tried a variety of tactics — new brands, partnerships, and delivery choices — to prove their wine bona fides and attract the growing number of Americans replacing beer with wines and spirits.

In May, Walmart introduced 10 private-label wines for $11 a bottle. The line, “Winemakers Selection,” featured rosés and vinos from Italy, France, and California. Nichole Simpson, Walmart’s senior wine buyer, told USA Today that they “drink like a $30 to $40 bottle.”

Winemakers Selection is a part of Walmart’s attempt to upscale its brands in stores and online. The label is targeted at middle-income shoppers thinking about spending on a bottle of vino. The design doesn’t bear Walmart’s logo, making it more acceptable to wine connoisseurs who want to trade down.

“Consumers want to indulge within their means,” said Catherine Lang, an analyst at Kantar Consulting who has researched discount grocers and convenient stores like 7-Eleven expanding their wine selections. “The challenge and the opportunity for brands in wine is the ability to convey quality with their private label.” 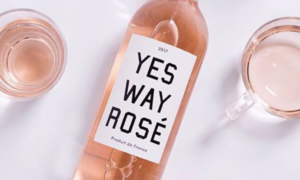 The wine play is working for Walmart so far. The company has gotten a bump in sales from Winemakers Selection and plans to release 11 more wines in the spring: “It’s been a real winner for us,” Steve Bratspies, Walmart’s chief merchandising officer, said last week.

Quality wine for low prices fits into a broader strategy at Target, too. The company has renewed its focus on selling its own brands to bolster its chic ‘Tar-zhay’ image.

Target introduced its $5 California Roots brand last year and added California Roots Rosé earlier this year. In a separate move, Target became a retail partner for Yes Way Rosé, a brand that caught fire on Instagram and goes for $12.99 a bottle at stores.

Target said alcohol was the fastest-growing unit in its food and drinks division last year. To meet increasing demand, the company has been gaining more liquor licenses and expanding alcohol aisles in stores. It aims to offer alcohol in 80% of its stores by the end of 2018.

For Kroger, wine is also a “growth category.” Kroger sells 80 wine lines, including exclusive brands like Storyteller for $2.99 to $29.99. Last week, Bloomberg reported that it was piloting a wine home-delivery service in a handful of markets. 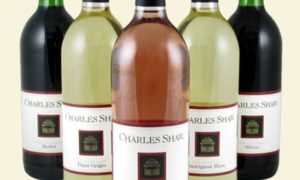 Kroger won’t sell the wines under its own label, but it’s trying to tap into an expanding online alcohol delivery market. Online beer, liquor, and wine sales grew 33% last year, according to analytics firm Slice Intelligence.

These big-box players have taken their wine cues from Costco, Lidl and Trader Joe’s, rivals that discovered years ago that selling cheap vino could be another way to win shoppers.
Costco sells $2 billion a year worth of wine at its warehouses. There are blogs dedicated to ratings, reviews, and deals on malbecs, merlots, and cabernets at Costco.

Costco has started offering more wine under its popular private label, Kirkland Signature, over the past few years to gain higher profit margins off the sales.

“The wine and spirits thing has caught us off guard in a positive way,” Costco’s chief financial officer Richard Galanti said last year of the response to Kirkland Signature wines.

Yet Trader Joe’s has set the retail standard for bargain wines with its Charles Shaw private-label brand, known as “Two-Buck Chuck.” Trader Joe’s struck gold with the brand, claiming awards at wine shows and earning a cult-like following among shoppers.

“Trader Joe’s showed that if you make a decent wine and you price it well, it will be a draw,” said Victor Martino, president of Third Wave Strategies, a California food and grocery consulting firm. “It’s a phenomenal seller.”

Walmart and Target Looking to Capitalise on Trader Joe’s ‘Two-Buck Chuck’ Success added by Newsroom on October 24, 2018
View all posts by Newsroom →