By Newsroom on November 15, 2016Comments Off on Weis Cuts a Juicy New Track in New Campaign by Clemenger BBDO

The latest Weis campaign via agency Clemenger BBDO, Brisbane features a fresh summer track that was played on whole fruit – wired for sound.

Weis Juicy Cuts drew on the musical talents of DJ/Producers, YesYou to compose the track – who then performed it live on the fresh fruit that goes into Weis bars.

The performances are made possible by combining music mixing software and nano computers that can turn any conductive object – like fruit – into a musical keyboard. 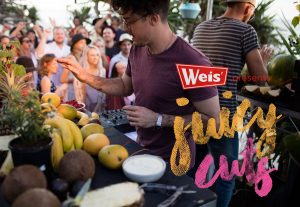 Julie Weis, joint managing director at Weis Frozen Foods said this campaign highlights a key truth about their product – that all Weis bars are made from whole, Aussie fruit: “Our ice cream is authentically made, so it was really important to us that our campaign was as well. It’s a real track, played on real fruit at a real party. And it was a great party!”

Marianne Harvey, Creative Director at Clemenger, said that a musical idea was a simple way to convey a summer vibe: “Music was a way to own the season. But Juicy Cuts is more than just a track played at a party with some tricky tech – it’s anchored in a product truth that separates Weis from the rest of the freezer,” she said.

Weis Juicy Cuts will run across a range of social and outdoor channels, alongside live radio and festival performances throughout summer. 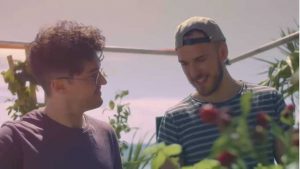 Weis Cuts a Juicy New Track in New Campaign by Clemenger BBDO added by Newsroom on November 15, 2016
View all posts by Newsroom →