By Newsroom on February 1, 2018Comments Off on Wendy’s Calls Out McDonald’s Frozen Beef in Super Bowl Ad

Wendy’s isn’t pulling any punches in its Super Bowl ad  in 2018, which calls out rival McDonald’s use of frozen beef in its burgers. 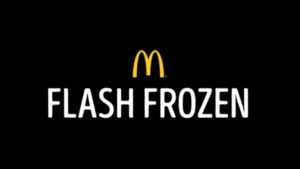 Wendy’s has long touted its use of “fresh, never frozen” beef in its own fare, a selling point that was the subject of its Super Bowl ad last year. Now, the chain is upping the ante with a snarky spot that points out a “not-so-hidden gem” on McDonald’s website.

In the commercial, Wendy’s uses its signature sense of humour to call out the fact that McDonald’s admits it uses flash frozen beef, or beef that is “ground fresh and then quickly frozen to seal in fresh flavour.”

This isn’t the first time that Wendy’s has taken a swipe at its burger rival. When McDonald’s announced its plans to serve fresh beef in all quarter pounder burgers across the majority of its restaurants by mid-2018, Wendy’s quickly shot back with a snide tweet.

.@McDonalds So you’ll still use frozen beef in MOST of your burgers in ALL of your restaurants? Asking for a friend.

In 2017, Wendy’s social media team hosted an AMA on Reddit to answer questions and shed some light on how they’ve managed to create a brand Twitter account that’s actually entertaining.

Wendy’s Calls Out McDonald’s Frozen Beef in Super Bowl Ad added by Newsroom on February 1, 2018
View all posts by Newsroom →