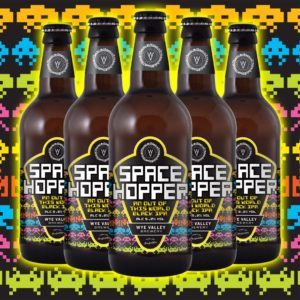 Independent brewers, Wye Valley Brewery in Herefordshire, have added a Black IPA to their portfolio with the retail launch of Space Hopper.

This new craft beer, which has an ABV of 5.2%, is brewed using a mix of local and American hops, including Mosaic, Cascade, Summit and Jester. The result is stout-like in appearance, but with an intense, zesty taste and tropical fruit aromas that are typical of an IPA.

Marketing Manager, Abbie Gadd comments: “As consumers look for more variety from their favourite breweries, Space Hopper meets this growing demand with its boldness in style, flavour and design.”

Space Hopper is the latest addition to Wye Valley Brewery’s limited-edition craft bottle range, which sits alongside its core range of cask, keg and bottle-conditioned ales, such as Butty Bach, HPA, and 1985.

Available to buy online and at the brewery shop: prices from £17.25 for eight 500ml bottles in the shop. Prices online differ to include postage and packaging.