By Newsroom on February 2, 2018Comments Off on Yellow Tail Returns to Hawk Wine During Super Bowl and Deliver Sandwiches to Fans

Last year, Australian wine producer Yellow Tail was the first wine brand in 40 years to break the ‘beer barrier’ during the Super Bowl broadcast. It’s back again this year with another creative media buy to reach consumers on the biggest advertising day of the year.

Considering Anheuser-Busch has exclusive category rights for alcohol during the game, Yellow Tail decided to run a trick play of sorts by buying ad space in local markets – local advertisers are allotted a certain amount of ad time during the Super Bowl. While the buy in 70 markets cost millions, it still allowed the brand to reach plenty of people. This year, Yellow Tail is again doing an end around play, buying in 80 US markets. 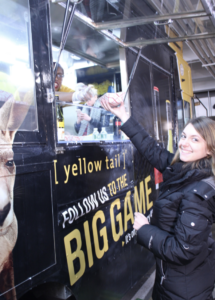 The brand is also going city to city with a food truck on its way to Minneapolis, handing out sandwiches by Food Network star Jeff Mauro.

In ‘Big Game Surprise’ a man comes home and is surprised to find a kangaroo in his home. His friends then burst out in a wave of confetti as a spokesman in a yellow suit holding a wine glass says that if you find a kangaroo at a party, it’s a good party, because Yellow Tail means fun is about to ensue. The Super Bowl TV spot was directed by Harald Zwart, the director behind 2010’s Karate Kid and Capital One’s Alec Baldwin campaign.

The total media spend by Yellow Tail and Deutsch Family Wine & Spirits is $10.3m, up from last year’s $10m, including approximately $5m on TV for the Super Bowl spot. It will also be featured online through social channels. 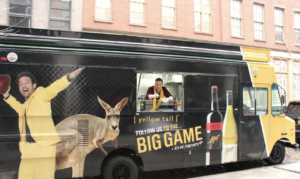 The custom branded food truck with football-friendly creations from Mauro was featured at 32 stops in nine cities, ending in its final stop in Minneapolis on Feb. 1.

The sandwich recipes are available for consumers to prepare at home – for tailgating, entertaining and enjoying games with family and friends. Mauro helped kick off the tour in New York City and reconnects with the food truck for special events in Minneapolis. 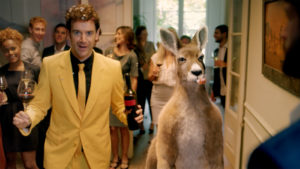 “I’m a huge fan of football and tailgating, so I am excited to partner with Yellow Tail to bring a fresh approach to game time hospitality,” said Mauro. “Lots of people are drinking wine at tailgates and game-watching parties – these recipes are perfectly matched to go with a wine like Yellow Tail and make the occasion special.”

In the brand’s spirit of fun and adventure, there is also a sweepstakes to encourage anyone who encounters the Yellow Tail food truck to post a photo on social media with the hashtags #YellowTailgate #sweepstakes, making them eligible for a chance to win a trip for two to Australia. In addition, the tour will raise awareness for the worldwide hunger relief organisation Rise Against Hunger to which Yellow Tail will be making contributions.

Yellow Tail Returns to Hawk Wine During Super Bowl and Deliver Sandwiches to Fans added by Newsroom on February 2, 2018
View all posts by Newsroom →