By Newsroom on April 12, 2017Comments Off on Y&R Russia Hides Clever Comic Strips in Wine Bottles to Promote Responsible Drinking

The more we drink, the less sharp our decision-making becomes – that’s the message hidden inside wine bottles in a clever campaign by Y&R Russia and backed by Russia’s biggest wine distributor, Simple Wine. In ‘Don’t Reach the Bottom’, healthy drinking advice printed on bottles is revealed as wine is decanted.

The agency has designed a series of 1,000 special wine bottles featuring hidden cartoon strips that can only be seen as the wine is poured out. There are three different comic strip designs, each depicting a different alcohol-related misadventure.

In one execution, a series of images start with a young couple who appear to be enjoying themselves sensibly then progress through depictions of increasingly wild behaviour before culminating in a drink driving-related accident only visible when the bottle is empty. Other designs deal with different negative effects of irresponsible drinking. 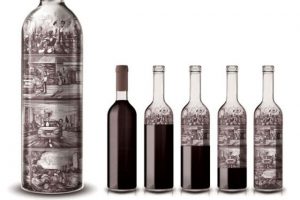 Aimed at middle class wine drinkers, the ‘Don’t Reach the Bottom’ campaign is intended to promote responsible drinking at a time of increased concern in Russia about excessive alcohol consumption.

Today, Russia has one of the highest alcohol consumption levels in the world – fourth only to Belarus, Moldova and Lithuania, World Health Organisation figures show.

‘Don’t Reach the Bottom’ bottles have been distributed via Moscow’s most popular wine stores and offered as complimentary drinks in selected bars with the hope recipients will both respond to the responsible drinking messages and share images of them via social media.

Bottles were also sent to popular bloggers and opinion leaders to build ‘Don’t Reach the Bottom’ into a popular theme across social media.

The new, more sociable approach marks a shift in tack from previous government-backed Russian alcohol awareness campaigns which have tended to resort to shock tactics.

Anatoly Korneev, Simple Wines Vice President said: “Russians don’t like to be lectured about drinking. But this approach aroused people’s interest and provoked them to think without being preachy.”