By Newsroom on June 30, 2015Comments Off on Abe Lincoln is Cheesed Off with America in New Tillamook Ad

“American Cheese”: (noun) a processed cheese comprised of as many as 18 ingredients like sorbic acid and sodium phosphate.

That’s right, “American Cheese” isn’t cheese at all. When packaged and sold in the aisle, it’s called “processed cheese product” because according to the FDA, it can’t be sold as real cheese. 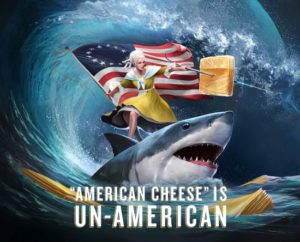 Which is why this Fourth of July, Tillamook and 72andSunny are calling Americans to declare independence from processed “American Cheese”. Iconic American leaders, like George Washington, Abraham Lincoln, and Betsy Ross band together to fight for America’s name and dignity by declaring processed “American Cheese” Un-American in a series of broadcast films, digital banners and social ads.

In one short film, Abraham Lincoln, atop a grizzly bear, spears the processed cheese product, arguing its unworthiness of being called “American.” The spot wraps with a call to action to sign the official petition to the White House to remove America’s name from processed cheese. 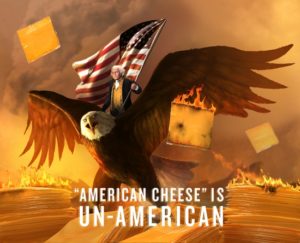 “Something that’s called American should be real and natural,” said Tillamook Senior Director of Marketing John Russell. “We want to get people to start thinking more about their dairy choices and to join Tillamook in the fight for authentic, real food.”

Abe Lincoln is Cheesed Off with America in New Tillamook Ad added by Newsroom on June 30, 2015
View all posts by Newsroom →