By Newsroom on August 9, 2013Comments Off on Absolut Flavours Undergoes Brand Update With New Designs 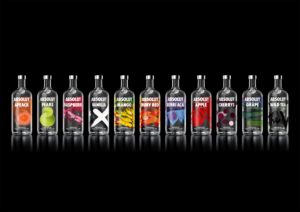 Pernod Ricard’s Absolut has unveiled a new look for its flavoured vodka range, rolling out across the UK in August 2013, with Absolut Pears and Absolut Raspberri the first to market, other flavours will follow throughout 2013 and 2014.

The aim of the redesign was to “give our customers distinct designs that are unlike anything one has ever seen,” according to Absolut global design director, Anna Kamjou.

The standard thinking says a fruit-flavoured vodka requires fruit imagery. We wanted to break that convention. We asked our design team to reach into the symbolism and myths tied to the ingredients to find each flavour’s core essence – and then amplify that essence through art…. Absolut has long challenged conventions through creativity. This across-the-board redesign is another example of the brand’s originality and boldness.

For the new look designers interpreted each flavour’s essence and then worked to elevate these impressions artistically into something premium, contemporary and progressive.

Adam Boita, marketing controller for Pernod Ricard, commented: “This is an exciting time for Absolut. While most flavoured vodkas look more or less the same, we are bringing a full range of innovative designs to market. Artistic, modern and unlike anything else around, we believe they will reinforce our position as creative leader and have unique stand out on shelf or on back bar displays.”