By Newsroom on April 5, 2013Comments Off on Absolut Vodka Celebrates The Sprit Of Mexico With New Limited Edition Bottle

Continuing its longstanding tradition of rich and creative collaborations, ABSOLUT VODKA announces its highly anticipated limited edition bottle design, ABSOLUTMEXICO, available in the U.S. for the first time after its debut in Mexico last year.

The release of ABSOLUT MEXICO is the latest limited edition offering from the world’s most iconic vodka brand and pays homage to Mexican culture and multicultural heritage.

ABSOLUT has a long history of creative collaborations, and this limited edition was developed in partnership with Dr. Lakra, one of Mexico’s most renowned contemporary artists and tattooists, from Oaxaca, Mexico.

The work of Dr. Lakra, also known as Jeronimo Lopez Ramirez, has been featured in exhibitions and museums around the world, including the Museum of Modern Art, the Hammer Museum and the Walker Art Center. 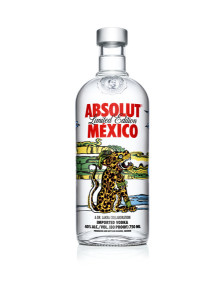 “For ABSOLUT VODKA, no one was a better choice for our collaboration than Dr. Lakra, with his technique of weaving in the design of existing objects, and in this case, an ABSOLUT VODKA bottle,” said Maxime Kouchnir, Vice President, Vodkas, Pernod Ricard USA.

“ABSOLUT MEXICO aims to further inspire cocktail lovers with the ABSOLUT brand, connecting the versatility of our vodka to the vibrant Mexican culture, which this design’s stunning effect does perfectly.”

Celebrating Mexico’s heritage has never been easier. The bottle’s colors – shades of orange, green, blue and yellow – make a stunning sight for entertaining, not only as a delicious libation, but also as a collector’s art piece. ABSOLUT MEXICO is the perfect base for a variety of signature cocktails, including ABSOLUT SUECA and ABSOLUT LIMONERO.

Absolut Vodka Celebrates The Sprit Of Mexico With New Limited Edition Bottle added by Newsroom on April 5, 2013
View all posts by Newsroom →