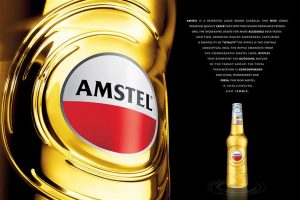 Heineken has extended its relationship with Adam & Eve/DDB by appointing the agency to handle the UK advertising for Amstel.

There is no incumbent on the account, which has been dormant in recent years.

Amstel has worked with agencies including Karmarama in the UK and 180 Amsterdam and StrawberryFrog globally in the past. Adam & Eve/DDB picked up the business without a pitch ahead of a marketing boost for the brand.

The agency has an existing relationship with Heineken, overseeing brands including Foster’s, Bulmers, Desperados and John Smith’s.

180 Amsterdam was behind a global spot for Amstel in 2009 that pieced together snippets of film footage such as traffic surveillance set to the Edith Piaf track Non, Je Ne Regrette Rien.

Karmarama created mainly outdoor and press executions for the brand between 2005 and 2008. Starcom Mediavest Group holds the media account for Amstel alongside other Heineken brands.