By Newsroom on November 14, 2016Comments Off on Adorable Robin Journeys #HomeForChristmas in New Waitrose Christmas Ad

It’s the story of the nation’s favourite bird, the robin. Based on the real-life migration of a Scandinavian robin, the film sees a courageous, young and fully CG robin undertake an epic journey across mountains and sea before finally reaching his home destination, where a young girl eagerly awaits his annual return. 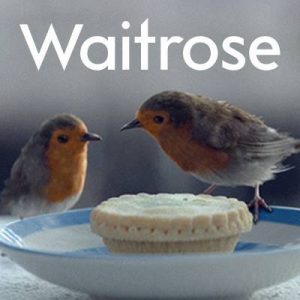 Upon his arrival, the robin is reunited with his companion. They share a festive treat (a Waitrose 1 mince pie) left out for them by the young girl as she watches on in delight. The story encapsulates the spirit of connection over the festive period and the joy of a host who provides the very best of welcomes. Because ‘At Christmas, there’s nothing quite like Waitrose’.

Directed by Sam Brown through Rogue Films, with post-production by The Mill, the lead role of the charming robin is played by a fully CG bird. Every element of the story was fact-checked by bird experts, ensuring the story is as close to reality and as factually correct as possible The team worked with specialists in robin behaviour and anatomy in order to create a physically and behaviourally accurate CG representation. This epic journey is matched by the equally epic soundtrack by Icelandic composer Jóhann Jóhannsson, adapting his track ‘Cambridge, 1963’ from his Oscar-nominated, Golden Globe-winning score for The Theory of Everything.

The campaign, with media planning and buying by Manning Gottlieb OMD, will be seeded on social channels, followed by a 90” TV launch on Sunday 13th November during The X Factor Results. A combination of 90, 60 and 40 second TV films will run for six weeks. The launch will be supported through a range of channels depicting movement including full motion large format DOOH and DEPs, TVC amplification through Facebook, YouTube and Twitter, Broadcast and Online targeted VOD and Digital Display takeovers which will show the robin moving through epic vistas on his journey home. 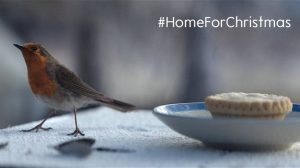 The 90 film will feature in cinemas nationally from Monday 14th November (2D), with a 3D version, developed by Prime Focus launching in December, bringing to life and immersing viewers into the epic plight of our plucky hero. An interactive game, developed by Manning Gottlieb OMD, will be promoted in social and owned channels, giving Waitrose fans an engaging and fun digital experience of the robin’s journey home.

Rupert Thomas, Marketing Director, Waitrose, says: “Coming home is a central theme at Christmas when welcoming, hosting and providing a special meal for loved ones at the heart of celebrations. Sharing the best possible food and drink with family and friends is one of the great joys of the festive period and we hope that the determination of our robin resonates with viewers as they follow his journey back to where he belongs. It’s a story of love, courage and the importance of enjoyment with family and friends.”

Richard Brim, Executive Creative Director, adam&eveDDB, says: “We’re really proud of this plucky little fella and his plight to get home for Christmas. It’s a warming story that speaks to the spirit of togetherness in the festive season and the joy of just coming home to where you belong. It feels like a great way to wrap up a great year for Waitrose.”

Sam Brown, director, Rogue Films, says: “The story is obviously about the migration of a robin, but we wanted to think of it in terms of a homecoming. Traveling home for Christmas is something most of us do, almost instinctually. So the bird’s story is really a human story: it’s about coming back to a place where you feel safe and loved. The film was a joy to shoot, and took us to some of the most beautiful places in the world.” 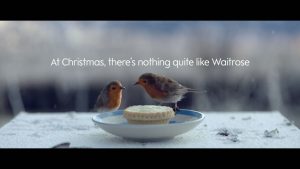 Tim Pearson, CEO, Manning Gottlieb OMD, says: “This is a powerful story based on a simple insight, told through the imaginative and creative application of media and technology. A breadth of rich and immersive experiences will give shoppers the opportunity to engage with our robin’s epic journey home.”

Jorge Montiel, Creative Director, The Mill, explains; “Working with specialists in robin behaviour helped us with our detailed observation of the classic behaviours of the robin. The way robins move, their size and their lack of facial expressions meant that the bird’s personality had to be evoked almost entirely through its body language. Every little breath, heartbeat, twitch had to be present, and in time; allowing this tiny creature to take centre stage amongst the dramatic landscapes behind him. It was amazing to work with Sam on this challenging project. He’s great at telling stories which capture human emotions and the way he tells stories works beautifully with animation, ensuring that the characters are able to sparkle and are the true focus of the story.”