By Newsroom on February 21, 2017Comments Off on Albino DJ Takes a Stand for Openness in New Smirnoff Campaign

Smirnoff continues to shine a light on those who are more inclusive than the world that surrounds them in their latest chapter of the ‘We’re Open’ campaign, featuring Jeffrey Jewell, a deejay with albinism taking his stand for openness.

In a stunning reminder to us all that staying open minded is key, the latest iteration of the campaign kicks off in the UK on February 21. It will later launch in global markets as Smirnoff continues to champion its message of inclusion across the globe. 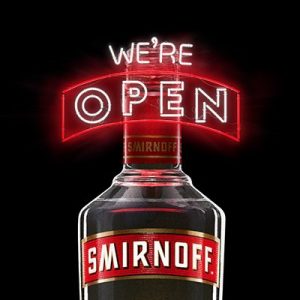 Directed by Zachary Heinzerling, in this chapter we meet deejay Jeffrey Jewell and take a look into his African roots and the influence they’ve had on his music. Jeffrey Jewell is a deejay with an open heart, who thrives on ignoring differences and bringing people together in the name of open mindedness and inclusivity.

“Inclusivity is such an important topic today. Smirnoff believes in the power of music to bring people together,” said Vince Hudson, SVP Global Brand Director, Smirnoff. “It’s a real privilege to be able to work with such an open-hearted deejay as Jeffrey Jewell whose music is so greatly influenced by a region that has challenged him, and in some extreme cases would persecute him.”

Taking a cinematic approach, the film by 72andSunny Amsterdam, shows Jeffrey in South Africa in varying scenes dancing on the streets of Brazzaville and playing in a club in Johannesburg. We see him bringing people together using his music and his desire to be a role model for other people with albinism who feel like they can’t go out. Jeffrey said of his experience, “I always wanted to play in Africa. Make people dance. But having albinism, it can be dangerous in some parts of Africa. But when people stare at me, I just smile.”

Continues Hudson, “Inclusion can be driven just by having a drink with someone different and Smirnoff, the world’s most popular vodka, is all about bringing more people together.”

Beyond the UK and Ireland, We’re Open will also launch across Africa and parts of Europe, Latin America and Asia. The latest campaign creative celebrates open mindedness with emotive headlines including, ‘Beats have no colour’ and ‘We’re all the same on the dancefloor’. Campaign media will include film, social activation, DOOH and influencer and media partnerships.

Smirnoff had previously celebrated the story of deaf dance teacher, Chris Fonseca and hip-hop artist Nadia Tehran and the challenges she faces being a second-generation immigrant.

“As fully signed up citizens of the world, we are extremely happy to be involved in this platform and this story,” says Nic Owen, Managing Director of 72andSunny Amsterdam. “Society is at its most powerful when we mix cultures together and this is no truer than at night. We’re proud to go out with Jeffrey and Smirnoff.”

Albino DJ Takes a Stand for Openness in New Smirnoff Campaign added by Newsroom on February 21, 2017
View all posts by Newsroom →