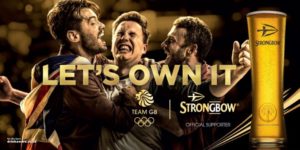 Strongbow’s Rio Olympics sponsorship of Team GB has been accused of encouraging underage drinking by members of the Alcohol Health Alliance (AHA).

The Heineken-owned cider brand has come under fire from the AHA’s roster of doctors, public health experts and alcohol groups who believe that Strongbow’s association with the Olympic athletes could encourage teenagers to start drinking. In a joint letter, members of the AHA, said that the alcohol brand’s sponsorship of Team GB will “promote the idea of drinking to our young people.”

Dr Clifford Mann, president of the Royal College of Emergency Medicine, and Sarah Toule of the World Cancer Research Fund are amongst the signatories. In the letter they argue that there is “strong evidence that exposure to alcohol marketing leads young people to drink at an earlier age.”

Strongbow struck a sponsorship agreement with the British Olympic Committee (BOA) in April in a deal that allows it to feature the official Team GB branding on its products as part of its “supporting the supporters” campaign.

Strongbow has addressed the AHA’s concerns, maintaining that its campaign was aimed entirely at adults and would not entail any individual Team GB athletes promoting its drinks.

“Our partnership is exclusively focused on the adult fans who will be cheering on Team GB over the next two weeks. Strongbow will not be sold or promoted at Games venues, feature in TV coverage, or be linked to any individual member of Team GB,” said a spokesman.

Olympic advertising has been an even greater talking point with the Rio Olympics due to the rule changes in advertising which now give non-official sponsors the chance to leverage the popularity of the Games.