By Newsroom on January 14, 2016Comments Off on Arla UK’s New Milk Brand Delivers First “Best of Both” Promise 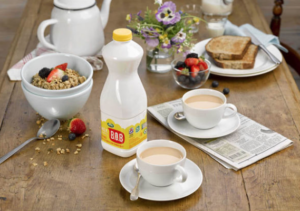 Arla, the farmer-owned dairy cooperative and the UK’s largest dairy company, has unveiled a game-changing concept in the milk aisle: the first ever skimmed milk that tastes as good as semi-skimmed.

Arla Best of Both (BOB) has a distinctive yellow lid and a 100% unique proposition. The new fat-free milk is pasteurised, filtered and enriched with protein to deliver a taste and texture that is as good as semi-skimmed. In addition, with Arla’s unique PurFiltre process, it also lasts longer in the fridge.

At a time when the UK Government is encouraging consumers to consider their eating and drinking habits, Arla BOB is set to rewrite the rules on what milk drinkers can expect from the traditionally blue, green and red-topped milk aisle. The simple yet brilliant process took three years to develop and combines traditional dairy craftsmanship with industry-first technology.

“We are a milk-loving nation that is more than ready to embrace something new. Our consumers have told us that they are increasingly seeking healthier daily dairy choices, but skimmed milk is seen by many as a compromise too far. With organisations like Public Health England encouraging people to consider drinking lower fat milks, we believe Arla BOB will be a popular choice for many consumers. 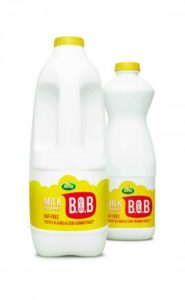 “According to our research, 49% of semi-skimmed buyers say they would buy skimmed but don’t like the texture and 33% would buy skimmed but don’t like the taste. We had to act! After three years of research, we’re making a brave new promise to milk drinkers: you can enjoy the best of both worlds. Arla BOB is fat free, like skimmed, but it tastes as good as semi-skimmed. Quite simply, we collect some of the naturally occurring protein in milk, and carefully add more of it back into skimmed milk. Free from artificial ingredients and additives, it’s this extra protein which makes Arla BOB taste so good.”

Arla BOB’s introduction follows the recent launch of Arla Big Milk, Arla Protein and Arla Skyr into the UK market. All arrivals are part of Arla’s promise to support farmers by developing products with tailored consumer benefits and to restore long-term health to the milk aisle. It also follows Arla’s recent “White Wednesdays” campaign to rally nationwide support for dairy farmers during the festive season.

Processing approximately two billion litres of milk a year, Arla continues to be one of the UK’s leading dairy companies and a supplier of fresh liquid milk and cream to the top retailers. Arla BOB will sit under the Arla master brand alongside Cravendale, Lactofree and Anchor.