By Newsroom on November 6, 2013Comments Off on Asda Goes For Rivals’ Jugulars With ‘Gimmick’ Free Christmas Campaign 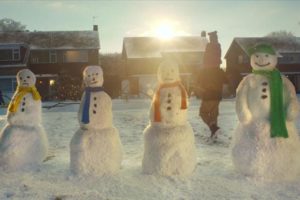 Asda is launching an aggressive Christmas campaign that targets the other big four supermarkets’ shoppers with a message that claims “You’re Better off at Asda”.

The supermarket claims its campaign, which consists of 20 “hardworking” Christmas TV ads, will have “no gimmicks, no promotions and no celebrity filled features”. Instead Asda will invest in lowering prices.

Steve Smith, chief marketing officer at Asda, said: “We’re different to the rest, we take our customers and our business seriously, but we’re keeping it simple, fun and lighthearted.

“We think it’s more important to invest money directly into lowering the prices of all our products instead of producing costly campaigns that just keep the ad guys happy.”

The supermarket will launch a 30-second ad during ‘The X Factor’ on Saturday, which will pan along a line of “shabby” snowmen decked in yellow, blue and orange scarves. The camera then settles on the last snowman that is a “bigger and better” and wears a green hat and scarf.

The narration states the viewer should think of supermarket savings as “these snowmen”. It continues to explain that while other supermarkets vow to match each other on price, Asda is still the only one that promises to beat them by 10%.

A second spot, called “wine lovers”, tells the viewer that Asda has won over 200 awards for wine. It follows a bottle of Asda wine from one Christmas scene to another.

The campaign was created by VCCP after Asda parted company with former ad agency Saatchi & Saatchi earlier in the year.

Last year’s Christmas advert by Asda provoked 620 complaints, the majority of which claimed it was sexist because it reinforced “outdated gender stereotypes”.

However, the Advertising Standards Authority ruled the ad, which showed a woman struggling to put on Christmas without any help from her family, was not prescriptive of the experience of everyone at Christmas and instead reflected Asda’s view of the majority of its customers’ Christmases.

Asda is supporting the launch of this year’s Christmas campaign with a three-minute take-over of ‘The X Factor’ app during the ad break the TV ad will air in.

The app will allow users to create and share their own snowman for a chance to win an Asda shop worth £500.

Smith said: “Although we have spent 10 per cent less on our media plan this year, the reach and frequency of our campaign will be much higher.

“We’ve developed a campaign that means you won’t be able to pick up a newspaper, watch TV or go online without seeing one of our products or adverts.”

Asda Goes For Rivals’ Jugulars With ‘Gimmick’ Free Christmas Campaign added by Newsroom on November 6, 2013
View all posts by Newsroom →