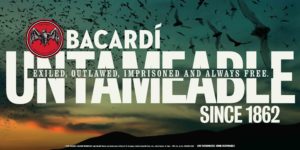 Everyone has a story.

The Bacardí brand and family’s story can be summed up with one word: “Untameable.” With more than 150 years of uncompromised passion triumphing against extraordinary odds, Bacardí is the rum brand with tales where the truth is better than any fiction.

Fearlessly honoring its legacy, the brand with “Irrepressible Spirit” written in its DNA, announced the launch of “Bacardí Untameable Since 1862,” a new global marketing campaign that tells the stories behind Bacardí rum, its origins in Cuba and inspires consumers to embrace life and live boldly to showcase their own “Irrepressible Spirit.”

The television, digital and print ads, which were made with the help of creative BETC London, embody the true grit and determination that sustained the rum brand and helped it thrive. The advertising will feature headlines such as, “We Remember Prohibition – It was a Blast;” “Some Men are Kicked Out of Bars – Others are Kicked Out of Countries;” and “Earthquakes, Fire, Exile, Prohibition – Sorry Fate, You Picked the Wrong Family.”

The ads offer snapshots of the Bacardí history during prohibition, exile from Cuba, and showcase how the Bacardí family had the original irrepressible spirit to overcome earthquakes, fire, war and revolution—none of which could defeat their spirit, because “True Passion Can’t Be Tamed.” The campaign is designed to engage millennial consumers to pursue their passions no matter what—much like the Bacardí family did—encouraging camaraderie and strength of character. 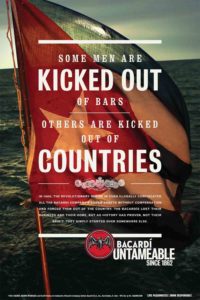 “Bacardí Untameable Since 1862” will be supported by 30-, 60-, and 120-second TV advertisements, as well as robust outdoor billboard, print and digital executions. The television spots—named “Procession,” because of the frame-by-frame timeline and sequence of events viewers experience—were directed by award-winning Dante Ariola, star actor Jordi Mollà and has voiceover of actor Jason Isaacs.

The ads, filmed on location at the UNESCO World Heritage site of Ouro Preto, Brazil, are highly stylized and have a blockbuster movie feel. The ads exude a realism that commands attention—engaging consumers to feel that with every sip, the Bacardí brand story is their own.

“Bacardí is known for its passionate drive, regardless of circumstance, convention or expectation. The campaign pays tribute to the brand’s enduring popularity, continuing ingenuity and connects with consumers as it inspires them to ignite the bold, ‘Irrepressible Spirit’ within us all,” said Dmitry Ivanov, Senior Global Category Director of Rums for Bacardi.

“Taking a global creative approach with the ‘Bacardí Untameable Since 1862’ campaign allows us to focus all of our marketing resources against a single powerful idea; an idea that’s completely ownable to Bacardí as it is rooted in the brand’s history and the family’s attitude to life.”

The Bacardí portfolio of light and dark rums globally will be united under one Bacardí creative look and feel. Every market in the world will have the same Bacardí swagger in its branding, marketing campaigns, advertising and visual identity for these rums. All markets will also feature the bigger-than-life, “untameable” Bacardí attitude.

Along those lines, the new campaign pays tribute to Don Facundo Bacardí Massó, who had the vision, 151 years ago, to blaze a new path and add steps never before used in rum making to create rum as the world knows it today. With the same pioneering soul of its founder, and in remembrance of its humble origins and beginnings in Santiago de Cuba in 1862, Bacardí rum will face the future with a bat logo inspired from the past.

Looking deep into the Bacardí archives to uncover the treasured, authentic, artisan bat designs over the past 151 years, the new logo is a creation inspired by Bacardí bat hand-drawn designs from the early 1900s. It stays true to the integrity of the original symbol, which in Cuban and Spanish heritage represents good luck, good fortune and family unity.

The Bacardí word mark has also been updated, influenced by the Cuban Art Deco style from the late 1920s to early 1930s. The most famous example of this Art Deco style is the former Bacardi sales office in Havana known as El Edificio Bacardí (The Bacardí Building). To this day, the 11-story building remains crowned by a Bacardí bronze bat and emblazed with the Art Deco stylized typeface.

“This campaign ushers in a new era for Bacardí rum, with a deeper focus on its provenance to showcase the unfailing determination of the Bacardí family and invites consumers to share in it,” said Ivanov. “This idea infuses the Bacardí brand with the authenticity of its origins, celebrates the incredible quality and craftsmanship of our rums and showcases a universally resonant attitude. In essence, ‘Bacardí Untameable Since 1862’ is a salute to the Bacardí family’s incredible heritage, to pursuing your passions, and to an extraordinary rum.”

Using creative digital formats, fans will be able to discover and share the “Irrepressible Spirit” of Bacardí rum for themselves, with access to artifacts from the brands 151-year history and behind-the-scenes photography and video footage from the ad shoot, offering a truly immersive experience.

“Bacardí Untameable Since 1862” will launch in the United States and Mexico on November 20, and India and Australia in December, followed by other markets in spring 2014.