By Newsroom on May 24, 2013Comments Off on Bacardi Rum’s New Marketing Campaign Celebrates Rich Cuban Heritage

BACARDÍ, the world’s best-selling and most awarded rum, launches a new marketing campaign, “Vivimos,” in celebration of the brand’s storied origins in Cuba.

A pioneer in rum-making and key player in Cuba’s fight for independence starting in the late 1800s, BACARDÍ rum’s founder Don Facundo Bacardí Massó and other revolutionary family members including Emilio Bacardí, brought ground-breaking change to the rum industry and to Cuba despite endless challenges.

The new campaign will drive consumer awareness and excitement while reinforcing the brand’s rich, courageous heritage at a time when authenticity and masculinity are key themes among target consumers.

The campaign’s TV and digital films were directed by filmmaker Jake Scott and depict stories that were inspired by actual historical events that shaped the brand.

The television spot “Cuba Libre” takes place during a time of political unrest in Cuba in the late 19th Century, when the country was fighting for freedom from Spain. 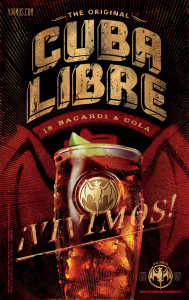 Scott used this historical backdrop to shape his story on how the Cuba Libre, more commonly called BACARDÍ and cola, is the original cocktail of freedom.

“Bacardi is a company with proud Cuban roots and courageous founders. This campaign celebrates their irrepressible spirit with the goal of inspiring men of today to live as boldly and passionately as they did,” said Toby Whitmoyer, vice president and brand managing director, rum category, at Bacardi U.S.A., Inc.

“Through ‘Vivimos!’ we toast to the rebel in all of us with the Cuba Libre, the original cocktail of freedom, named for the Cuban rally cry for independence.”

Created in 1900 by American soldiers gathered in Old Havana to celebrate the end of the Spanish-American War, the original Cuba Libre is a refreshing mix of BACARDÍ rum, cola and lime.

For more than 112 years, the Cuba Libre, the natural cocktail choice for rebellious spirits, has been enjoyed and remains one of the world’s favorite cocktails.

Following the Bacardi 150th anniversary celebration in 2012, “Vivimos” builds on consumer curiosity and the momentum surrounding the brand heritage.

OW, the boutique agency who oversees brand and creative strategy, created all of the campaign creative assets to share with consumers additional elements of the BACARDÍ rum great story.

The integrated marketing campaign launched on May 20, Cuban Independence Day, with a national rollout that includes cable TV, outdoor placements, experiential, digital activation and on and off-premise programming.