Bacardi Shares #MojitoMoments in Real-Time Across Summer with New Campaign

By Newsroom on February 28, 2018Comments Off on Bacardi Shares #MojitoMoments in Real-Time Across Summer with New Campaign 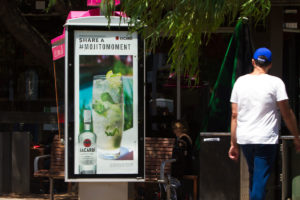 Bacardi-Martini Australia has released its latest campaign with OMD Sydney, promoting Bacardi as the perfect first drink of the evening with #MojitoMoment.

Over 60 influencers have shared images of their own #MojitoMoment on Instagram, which were pushed out instantly via targeted digital OOH locations.

The campaign was produced by OMD Create, the agency’s content and integration team, in partnership with influencer platform, TRIBE.

Jules Lund, founder, TRIBE said: “Thanks to sophisticated smartphone cameras, it’s really the first time in history a brand’s own customers can generate creative-agency quality imagery at scale, speed and a fraction of the cost. OMD Create and Bacardi are well ahead of the trend. They’ve empowered their own brand fans to publicly and authentically celebrate their love of Bacardi. And who better to create content customers love than the customers themselves.”

Out of Home advertising was upweighted and contextually targeted to drive traffic into key partner venues located in Sydney, Melbourne, Brisbane and Perth. For added relevancy, the influencer content featured in proximity to the location of where it was originally captured.

Thomas Hutley, head of OMD Create Sydney commented: “This campaign was a great example of seamlessly integrating online and offline to drive action around key venues. For further engagement, we developed branded Snapchat filters that were geo-targeted to all partner venues. This enabled consumers enjoying a Mojito to instantly share their own #MojitoMoment with friends.”

Jonathan Sully, marketing director, Bacardi Martini Australia added: “We are excited to bring this new level of engagement to customers. Bacardi Mojito moments demonstrates our approach to connecting with consumers through immediacy and innovation, via consumer centric creative.”

To date, the creative has driven over 50,000 Instagram engagements, and in January Bacardi saw a direct uplift in sales.

Bacardi Shares #MojitoMoments in Real-Time Across Summer with New Campaign added by Newsroom on February 28, 2018
View all posts by Newsroom →