By Newsroom on May 19, 2014Comments Off on Beck’s Creates ‘Playable-Poster’ in Support of New Zealand Music Month

Beck’s New Zealand presented “the world’s first playable poster” to celebrate its dedication to music. The beer brand that has been turning beer into art since 1874, has developed a street poster that played and remixed music when touched. The piece arrived as part of a broader campaign that is unleaded on the brand’s Facebook page.

The playable music posters from Beck’s Beer have been developed using a kit of technology that included conductive ink to sensors and in-built speakers. Once touched, the posters start playing contemporary music piece that can also be hacked—using special tools, one could remix the track, adding various audio elements. 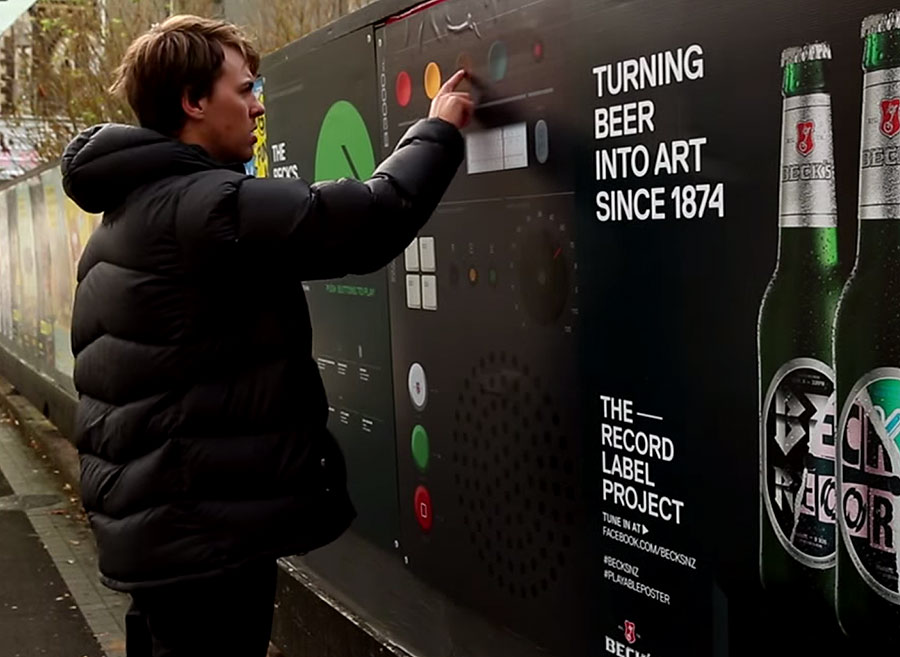 The brand also encourages its fans to download the #PlayablePoster tracks for free here. The pool of artists who joined this project includes The Phoenix Foundation, Lawrence Arabia, Doprah, Little Bark, Two Wolves, Super Villains (RMC),Janine and the Mixtape, Ash Graham, ghost wave, and Third3ye. Beck’s says it’s a limited free release up to 10,000 pieces, so fans have to be quick to get their freebie.

Along with the audio poster and the tracks, Beck’s has released Beck’s Records series of bottles that feature vibrant collage labels that merge different typography styles.

Beck’s Creates ‘Playable-Poster’ in Support of New Zealand Music Month added by Newsroom on May 19, 2014
View all posts by Newsroom →