By Newsroom on July 20, 2016Comments Off on Ben & Jerry’s Pushing For Change in the US with a New Ice Cream

Ben & Jerry’s is pushing for change this election year with a new ice cream, new marketing campaign and a few arrests.

The ice cream maker has long promoted its progressive social mission, speaking out on issues including growth hormones in milk, marriage equality and climate change. In 2016, its effort is a “Democracy Is in Your Hands” campaign that uses online videos showing fingers, spoons and ice cream to explain such complex political topics as the power of big money and voting rights, and to push people to vote. As part of the initiative, Ben & Jerry’s has created a new flavour: Empower Mint. 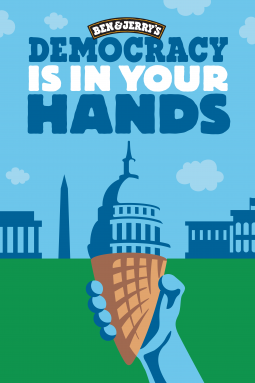 “We take on the issues that we think are most important to our values and where we can have an impact,” said Ben & Jerry’s Senior Global Marketing Manager Jay Curley. “I don’t think this is a big departure from where we’ve been, but I do think it’s another step forward in really trying to bring more justice into this world.”

Ben & Jerry’s grew from a Vermont scoop shop opened in 1978 by Ben Cohen and Jerry Greenfield into an international ice cream maker that allocates 7.5% of its pretax profits to fund various projects. When Unilever scooped it up in 2000, unique terms of the $326 million deal included establishing an independent Ben & Jerry’s board of directors to focus on areas such as the company’s social mission and brand integrity.

Mr. Cohen and Mr. Greenfield, who are not on the Ben & Jerry’s board but remain involved with the company, were among 300 or so protesters arrested in April at a Democracy Awakening event in Washington, D.C. With them were longtime board member Jeff Furman, who helped write their business plan; Greenpeace USA Executive Director Annie Leonard, a board member since 2013; and Ben & Jerry’s Activism Manager Chris Miller.

Ben & Jerry’s is among the more outspoken brands on social issues, even though it is housed within a major public company. It is the only big brand in the Democracy Awakening coalition, which is largely comprised of environmental, political, religious and social organizations.

“We know that often we end up being one of the first companies in movements like this, but we don’t at all want to be the only [one],” said Mr. Curley. “This is about movement building, it’s not about branding. And so my hope is, moving forward, other companies will kind of get involved in these issues.”

It’s not bad for business, either. Unilever does not break out sales of Ben & Jerry’s, but said the brand’s sales grew at a double-digit pace last year.

The Ben & Jerry’s board has legal oversight over brand equity, the social mission and product quality. Unilever appointed two of the 10 current members, Ben & Jerry’s CEO Jostein Solheim and Unilever executive Pier Luigi Sigismondi, who sit alongside others with a mix of activist backgrounds and more traditional business experience.

In general, the brand focuses its call-to-action campaigns on the earth’s climate and social and economic equity. The board approves issues the company plans to speak on, partners it will work with and campaigns it plans to use, but does not create the campaigns. Mekanism is the lead agency on the project, which includes a petition seeking to reauthorize the Voting Rights Act.

In May, to underscore the meaning behind limited-batch flavour Empower Mint, Ben & Jerry’s unveiled the product at an event in North Carolina, a state with voting policies that the company and others see as restrictive, particularly for minorities. Rev. Dr. William J. Barber II, president of the state’s NAACP chapter, participated in both April’s Democracy Awakening event and the ice cream launch. 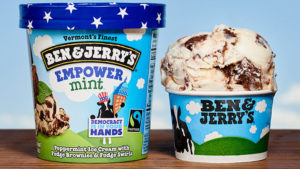 A 60-second spot is one of a series that illustrates the idea of equal access by showing spoons dipping into a pint of Empower Mint, a peppermint ice cream with fudge brownies and fudge swirls. Not everyone gets an equal share, as big money’s giant spoon takes an oversize amount, while a disenfranchised voter’s flimsy plastic utensil cannot even dip into the sweet stuff.

“With Ben & Jerry’s, we want to couch the issue in a way that makes sense coming from an ice cream brand,” said David Horowitz, creative director at Mekanism.

In 2015, for example, a video showed ice cream melting at just two degrees above the recommended temperature, a metaphor for the impact a two-degree temperature difference has on the planet.
Clearly, such messages resonate with the brand’s core audience: As of late June, the current campaign has more than 1 million video views and 12,000 petition signatures. 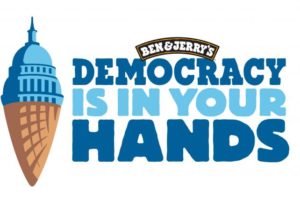 Ben & Jerry’s has worked with voter issues before. For example, it partnered with Rock the Vote in 2004 to get young people to register, including patrons who waited in long lines at its scoop shops on the company’s annual free cone day. Ben & Jerry’s says it does not support particular candidates, parties or super PACs. Still, Mr. Cohen made his own small batch of a Bernie’s Yearning flavour in early 2016 to honour Bernie Sanders’ campaign. That product was not connected to the company.

Ben & Jerry’s is devoting about 20% of its marketing budget to “Democracy Is in Your Hands” this year. In 2012, it spent closer to 10% on politically themed efforts with its “Get the Dough out of Politics” effort focused on trying to overturn Citizens United, Mr. Curley said.

Ben & Jerry’s Pushing For Change in the US with a New Ice Cream added by Newsroom on July 20, 2016
View all posts by Newsroom →