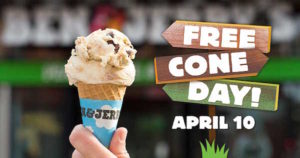 To create a tasteful impression on Ben & Jerry’s consumers this Free Cone Day, PHD has partnered with Shazam to produce an immersive experience for ice cream fans all over Australia.

With the help of augmented reality, consumers will now be able to engage with interactive, educational and entertaining content about their favourite flavours while waiting for their free scoop on April 10th.

Now in its 40th year, Free Cone Day attracts queues of up to an hour in length outside Ben & Jerry’s Scoop Stores across Australia, and this year, the brand intends to break the national record by distributing over 110,000 free scoops.

To tap into this massive dwell time, PHD and Shazam have augmented all audio-, visual- and location-enabled marketing assets associated with the event, which audiences can scan using the Shazam app to access a host of immersive content from Ben & Jerry’s, thereby extending the consumer experience at the event beyond the free scoop and increasing awareness for the brand’s “goodness” stories.

One such example includes the story behind the brand’s popular Chocolate Fudge Brownie flavour; most of Ben & Jerry’s Australian consumers don’t realise the brownies are baked by Greyston Bakery in New York, a company that provides training and employment to job-seekers in need of a helping hand. As an additional incentive for queuing up, audiences interacting with the augmented reality will also be entered into a draw to win a year’s supply of ice cream. 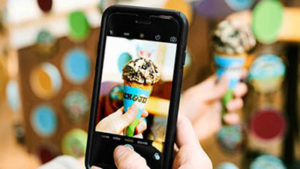 Kent Hildred, retail marketing, training and communications manager, Ben & Jerry’s said: “Free Cone Day is the Ben & Jerry-est day of the year and, like every Free Cone Day for the past 40 years, it’s all about our fans and thanking them for their support. On these days, we regularly have fans eagerly waiting for up to an hour for a free scoop of Ben & Jerry’s goodness, so finding ways to entertain and reward them is always top of mind. This year, we are thrilled to be working with PHD and Shazam to offer an experience that can entertain, educate and reward our fans in a very unique and creative way. We look forward to seeing our fans learn about why Ben & Jerry’s is “made of something more” and win prizes at the same time.”

Steve Sos, managing director, Shazam added: “It is great to be working with both Ben & Jerry’s and PHD on such a rewarding and playful campaign. We are excited to be able to execute a campaign that allows consumers to access Free Cone Day content by Shazaming any audio-, visual- or location-enabled marketing assets associated with the event. By coupling ease of access to content with a fun, augmented reality experience, we hope to add an exciting layer of interactivity and engagement to Ben & Jerry’s already iconic day.”

Kathryn Furnari, group business director on the Unilever business at PHD Australia concluded: “It’s a pleasure to be working alongside Shazam to make every scoop of this year’s Ben & Jerry’s Free Cone Day count, taking the consumer experience further than just devouring the tasty treat. Ben & Jerry’s has always been about more than just really good ice cream, and it’s really exciting for us to find new and innovative ways of using media to entertain and engage with loyal fans on one of Australia’s tastiest days of the year.”

Ben & Jerry’s fans can enjoy a free cone from 12pm to 8pm on April 10th at select locations across Australia.

Ben & Jerry’s, Shazam and PHD Add AR to Australia’s Tastiest Day of the Year added by Newsroom on April 10, 2018
View all posts by Newsroom →

One Response to "Ben & Jerry’s, Shazam and PHD Add AR to Australia’s Tastiest Day of the Year"