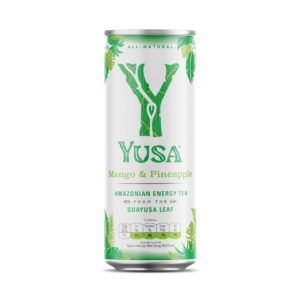 BFT Drinks has created the first drink in the UK using the native Amazonian Guayusa (pronounced ‘gwhy-you-sa’) leaf. Yusa is the only energy tea in the category not to use tea extract and added caffeine – all Yusa’s energy and health benefits come fromGuayusa itself, the newly discovered Amazonian super-tea-leaf.

Guayusa grows in the Amazon rainforest, primarily in Ecuador, where its acute health benefits are heralded by locals – guayusa has been an important ingredient of tribal life for many centuries.

The second most caffeinated plant in the world after coffee, Guayusa has recently been approved in the UK for food and beverage use and contains twice as many antioxidants as green tea, providing clean, balanced and sustained energy.

Aimed at the health-aware consumer, Yusa aims to bridge the gap between health and energy drinks. Its natural mango and pineapple flavour is sweetened with Stevia and has low sugar content (less than 2.5g per 100ml), the same amount of caffeine as in one strong cup of coffee (100mg/250ml) and the equivalent antioxidants to two cups of green tea (220 mg GAE/250 ml).

In addition to Guayusa, other natural ingredients in Yusa include an invigorating blend of carbonated water, mango and lemon fruit juices and natural flavours. The drink contains no added sugar, preservatives or taurine.

Yusa is the first product to be launched by BFT Drinks, which was formed in 2017 by three millennial entrepreneurs, with a shared interest in social and environmental issues.

Andy Bell, founder, BFT Drinks says: “Yusa, as an energy tea, is bringing a totally new kind of natural, soft drink to the UK market and will appeal to those consumers who are looking for a healthier alternative to traditional energy drinks, whether they’re at the gym, at work or on-the-go. In parts of the United States where Guayusa drinks have been on the market for five years, they are already outselling Red Bull 3:1 so we’re confident that Yusa will provide a real challenge to the energy drinks sector in the UK as people start to take more notice of the ingredients in their drinks.”