By Newsroom on June 12, 2018Comments Off on Birds Eye Backs ‘Dadding’ in #Solidaritea Father’s Day Campaign by Recipe

Birds Eye is building on its #Solidaritea campaign, championing parenting and putting an end to ‘parent shaming’. The new campaign showing solidarity with parents is breaking in the run up to Father’s Day on June 17th.

The campaign is the next instalment in an initiative developed with Recipe. It reflects Birds Eye’s commitment to supporting all hard-working and fun-loving parents, as the brand that’s always there whenever needed.

In 2017 Birds Eye launched #Solidaritea in support of a group of mummy bloggers who had been condemned by the Daily Mail as ‘slummy mummies’.  It was a rallying cry for all to stand in support of British parents by celebrating their (sometimes) thankless parenting moments.

One year on, Birds Eye is celebrating the role of dads – their desire to work just as hard and be just as involved in parenting as mums, 365 days of the year – with an online film, ‘More than just a day’, created by Recipe.

The aim is to challenge traditional and antiquated roles of ‘dadding’ by featuring a broad cross-section of dad roles from same-sex parents, single dads, hands-on dads, stay-at-home dads to women and grandparents that fulfil the role of dads too. It is also passionate and celebratory, showing the good bits, the bad bits, the funny bits, the challenging bits and – above all else – the cherished moments of parenting. 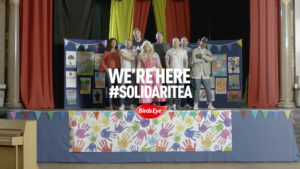 ‘More than just a day’ features a group of daddy bloggers delivering a poem on a school stage, highlighting the issues that are important to them. It also addresses Birds Eye’s role – one of support, not judgement, ending with the sign off: “We’re here. #solidaritea”.

The poem tackles meaningful parenting subjects – some are serious, some less serious, but delivered with compassion and attitude. Lines from “It’s 365, tough, glorious, cherished days”, “It’s the best thing I ever did”, to “I’m a punching bag day” encapsulate the dynamic joys and challenges of being a modern dad.

All of the ‘dads’ featured are parents/grandparents – LadBaby, The Life of Riley, The Dad Network, Daddy & Dad and Ben Telford (husband of Clemmie Telford; one of last year’s #Solidaritea mummy bloggers). The script was co-developed, based on many of their personal experiences.

Rebecca Nascimento, Birds Eye General Marketing Manager, comments: “We know how tough parenting is. We also know how truly amazing it is, and as a brand, we want to show our support for all parents and the day to day challenges that this brings. Standing alongside all parents is important to us because we’re proud to be a brand that makes life a little easier at one of the trickiest times of the day; Birds Eye Fish Fingers are a tea-time staple and a saviour for many families short on time and with fussy little eaters. Last year, we saw such great support for our troupe of “slummy mummies”, so this year we wanted to continue supporting parents across the country with a fun, light-hearted campaign for dads ahead of Father’s Day.”

The film will go live on the June 11th – shortly before Father’s Day on June 17th. It will be promoted across Birds Eye’s social channels and shared by the featured bloggers.