By Newsroom on March 16, 2018Comments Off on Blue Apron is Planning to Sell Meal Kits in Stores 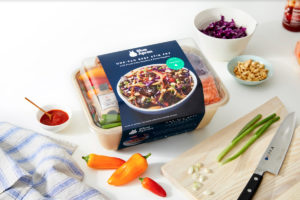 plans to start selling its prepared dinners in stores later this year, part of an effort to reach more customers as growth stalls.

The New York-based pioneer of boxed meals is still very much focused on its core online subscription model, but it’s also considering selling single kits on its website and is in “active conversations with a variety of retailers” to put its meals on store shelves in 2018, said Louise Ward, a spokeswoman.

Currently Blue Apron’s offerings consist of weekly deliveries of two to four recipes for as many as four people.

Expanding the company’s options will attract “different segments of customers where they want to meet us,” Ward said, while acknowledging the ideal sales venue “isn’t always online.”

She said the company hasn’t yet detailed plans about pricing or partners.

One of the first meal-kit companies, Blue Apron has been losing customers amid increased competition and struggles with distribution. Blue Apron reported it had 746,000 customers at the end of 2017, down from 879,000 a year earlier. Formidable rivals have entered the market, including Weight Watchers and Walmart.

Blue Apron is Planning to Sell Meal Kits in Stores added by Newsroom on March 16, 2018
View all posts by Newsroom →