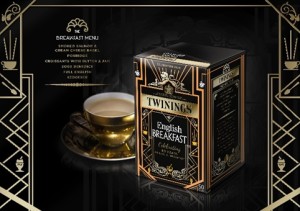 BrandOpus has designed the limited edition 80th anniversary packaging for Twinings English Breakfast tea, which the consultancy says was the ‘first designer tea’.

The tea was created in 1933 to accompany the popular breakfast choices of the day.

BrandOpus has worked with Twinings on a number of previous projects including the Signature Blends range, Everyday Tea, Infusions and green tea ranges.

The consultancy was briefed to create packaging that reflected the 1930s, when the English Breakfast tea first launched.

‘We have created a Twinings English Breakfast pack inspired by the opulence and grandeur of the Art Deco era’, says Paul Taylor, BrandOpus executive creative director.

‘Our aim was to create an impactful design that captures the imagination whilst reflecting the premium credentials of Twinings’.

Details on the packs include gold foil, with illustrative references to breakfast time, such as boiled egg and alarm clock icons.

The Twinings golden lion brand marque is housed within an image of the Twining’s Strand shop doorway.

The 80th Anniversary packs will be available from October 10 at Watirose, the Twinings website and at the Twinings shop on The Strand, in central London.