By Newsroom on June 1, 2015Comments Off on Bud Light Becomes First Alcohol Brand To Use Snapchat 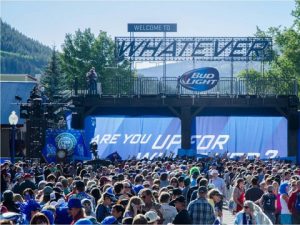 Bud Light is the first alcohol brand on Snapchat, using the messaging app’s age-gated ads to appear around the content people are sharing around events.

It sees the brewer join the likes of Samsung and McDonald’s in buying media to appear in the montages of photos and videos Snapchatters are creating around specific events. Dubbed “Stories”, the feature is being used by Bud Light this weekend in order to push its annual secret Whatever US party, according to Ad Week.

Those beer fans lucky enough to attend the event can share their Snapchats around the event’s own sponsored Story on the ethereal messaging service. A team of Snapchat employees will also pluck the best user-generated content to feature in the montage.

The brewer’s ads, which have been created especially for the app, are age-gated so that only those who are 21 years or older can view them. The age verification uses the date of birth information supplied when the Snapchat account was set-up.

The milestone is made even more interesting because it’s for a branded event. Where other advertisers have tapped into the buzz around events like the American Music Awards, Bud Light is an example of how Snapchat’s ads can be incorporated into wider marketing programs.

Bud Light’s foray on Snapchat comes hot on the heels of its first ads on Tinder and fellow AB Inbev beer Stella Artois’ use of Instagram ads. Alcohol brands have greeted social media with bated breath due to the restrictions and regulations around promoting on platforms popular with young teens. The brewer’s Snapchat ads could irk activists concerned that kids could see them. 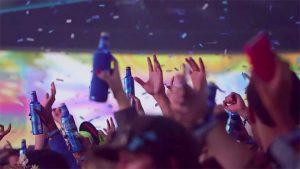 “It’s important for us to stay up to speed and always be ahead of the curve in the digital channels where consumers spend their time, so Snapchat today is the platform where millennials spend a lot of time messaging with their friends,” AB InBev’s vice president of consumer connections Lucas Herscovici told Ad Week. “We found this as an appropriate opportunity to partner with Snapchat to have a live story where we allow consumers who are not able to be in Whatever, USA to see what’s happening there in an authentic way.”

The move comes as Snapchat looks to generate bigger revenues from advertising. Despite a growing appetite among marketers to reach its 100 million users, they have only recently been given more robust tools to engage them. From 10-second video ads that cost advertisers two cents a view to revamping its Stories feature, the messaging app has been sharpening its advertising offering since the start of the year.

Bud Light Becomes First Alcohol Brand To Use Snapchat added by Newsroom on June 1, 2015
View all posts by Newsroom →