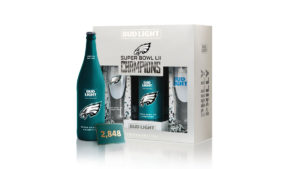 Inspired by the name of the game-changing play call, “The Philly Special” and the popular “Dilly Dilly” campaign, Bud Light produced 20,418 packs, which correspond with the date of the Eagles’ Super Bowl win on 02/04/2018.

The commemorative packs will go on sale Thursday, August 16, the day of the Eagles’ third pre-season game, a Super Bowl LII rematch against the New England Patriots.

Each limited edition Super Bowl LII pack will be individually numbered and will include a 25 oz. Bud Light aluminum bottle and two specially-designed Bud Light glasses, etched with the legendary “Philly Special” play. Select commemorative packs will also give fans the opportunity to receive tickets to the Eagles’ first regular season game on Thursday, September 6.

“It was a dream season for Philadelphia Eagles fans, and we’re excited to continue celebrating their championship as we prepare to kick-off a new season,” said Andy Goeler, Vice-President of Marketing, Bud Light. “Eagles fans adopted our famous ‘Dilly Dilly’ phrase, transforming it into their own rallying cry, ”Philly Philly,’ and we’re so excited to give them another reason to relive the epic win with the commemorative pack.”

“Philly Philly” emerged as a rallying cry for the city of Philadelphia, as a play-on-words of Bud Light’s “Dilly Dilly” campaign that launched at the start of the 2017 NFL Season and Bud Light also helped Philadelphia celebrate their Super Bowl victory with free beers thanks to a promise made to Eagles offensive tackle Lane Johnson in the 2017 preseason.

“Bud Light’s commemorative ‘Philly Philly’ pack is the perfect way for Eagles fans to relive and celebrate the first Super Bowl victory in franchise history,” said Brian Napoli, Vice President of Corporate Partnerships. “Bud Light played an integral role in our team’s championship journey last season. We appreciate their unwavering support and look forward to collaborating with them in the future on more unique ways to engage our passionate fan base.”