By Newsroom on September 8, 2017Comments Off on Bud Light Imagines What It Would Be Like To Have Your Own Personal Beer Vendor

Ever wonder what it would be like to have your own personal beer vendor following you around? Turns out it’s not as great as you might think.

Bud Light explores the absurd idea in its first broadcast ad of the NFL season, from agency Wieden+Kennedy New York. 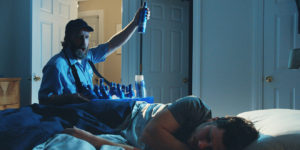 “Vendor” opens on a guy telling his friend it would be “awesome to have this guy around all the time” as a Bud Light vendor hands him an ice cold beer at a football game. But while things seem great at first—beer on the couch without needing to get up, shower beer—it soon turns into a classic “Be careful what you wish for” tale.

“Vendor” ends with a tearful goodbye and the line, “Here’s to the friends you can always count on,” followed by a positioning of Bud Light as “Brewed to be America’s favourite light lager,” which W+K introduced last month with a pair of ads touting the product’s “four simple ingredients.”

The ad will make its broadcast debut tonight during the second quarter of the New England Patriots’ home opener against the Kansas City Chiefs and will be supported by a “Bud Light Touchdown Glass” in-game initiative. The glass will be handed out to Patriots fans in attendance and lights up every time the team scores, as well as during a toast celebrating the Super Bowl LI banner being unveiled in Gillette Stadium for the first time. 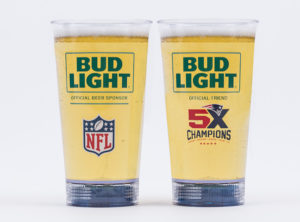 Versions of the Bud Light Touchdown Glass for a variety of teams are also available for purchase.

“Vendor” is the latest in the “Famous Among Friends” campaign that W+K New York launched for the brand this past year with its “Between Friends” bromance. A 60-second spot with the ghost of Spuds MacKenzie ran during the Super Bowl.

Last fall, AB InBev wrapped up W+K’s campaign starring Amy Schumer and Seth Rogen ahead of schedule. Thus far things seem to be going more smoothly with the “Famous Among Friends” effort, with the agency trading in lighthearted humour centred around friendship rather than attempts at political parody.

Bud Light Imagines What It Would Be Like To Have Your Own Personal Beer Vendor added by Newsroom on September 8, 2017
View all posts by Newsroom →