Bud Light has brought back its team-specific cans for the 2016-2017 NFL season. The beer behemoth has partnered with 27 of the 32 NFL teams on distinct can designs, which got a minimalist makeover from design firm Jones Knowles Ritchie. 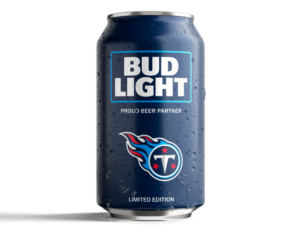 The streamlined look is intentional, according to Bud Light’s VP, Alexander Lambrecht: “A lot of the design language that we’ve been using ever since we introduced the new design has more single-minded, much more simple sophistication, much more celebrating what we want to celebrate.”

“With the team cans,” he added, “we want to celebrate the team and Bud Light in a very iconic way, and I believe that we don’t need a lot of details, don’t need a lot of background. We’re just celebrating the two key elements that matter most to the consumer or to the fan.”

The previous effort was met with “a tremendous amount of engagement” from consumers, according to Lambrecht, who noted that the decision to bring back the cans was a “no-brainer.”

“The can feels like a team jersey that you can drink out of,” said Lambrecht. 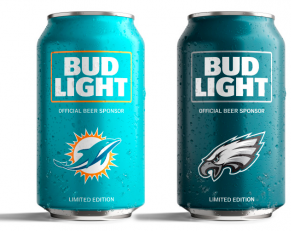 In September, Bud Light will roll out a campaign to accompany the team cans. “It will be the most local campaign Bud Light has ever seen,” said Lambrecht. “What that means is [for] every single consumer touch point we will have local content, whether that’s TV, digital, social, experiential, point of connection, outdoor. We will have a local touch with every single component.”

He added: “We have cans for every team, we have lines inspired by the individual teams, and that will bring that to life across everything we do.”

In 2015 the company rolled out 28 team-specific designs; this year it has released 27. With the move of the Rams to Los Angeles, the company is currently in negotiations with the team for a new contract. Should that come to fruition, Bud Light will release a Rams can shortly.