By Newsroom on March 25, 2014Comments Off on Budweiser Brew House Opens Doors at Ballpark Village in St. Louis 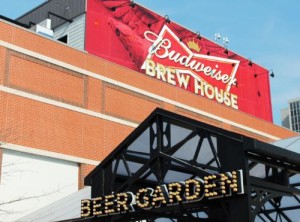 Just in time for the start of the 2014 baseball season, the new Budweiser Brew House in the much-anticipated Ballpark Village development in St. Louis will open its doors this week. Spanning three levels and 26,000 square feet, the venue includes an outdoor beer garden and rooftop deck with spectacular views of Busch Stadium.

Featuring a full menu and more than 200 beer taps, the Budweiser Brew House will offer live music and regular special events with Anheuser-Busch brewmasters to offer brewing insights and knowledge to home brewers who share a passion for making and celebrating great beer. 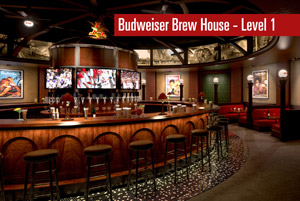 Fans who are 21 and older can win VIP access to the Joe Nichols concert on Saturday, March 29, as well as tickets to the St. Louis Cardinals home opener on Monday, April 7, via the Budweiser Facebook page.

“The Budweiser Brew House at Ballpark Village is a symbol of Anheuser-Busch’s commitment and continued investment in our community,” said Julia Mize, Vice President, Experiential Marketing, Anheuser-Busch. “Whether the Cardinals are at home or away, fans can enjoy great food and some of the best beers in brand-new ways through one-of-a-kind offerings only the Budweiser Brew House can deliver.” 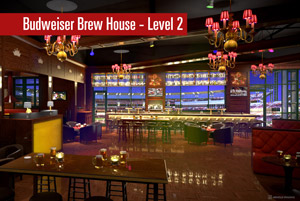 One of the Budweiser Brew House’s most unique features, a 21-foot tap wall, allows guests to pour and explore a variety of beers on tap at the ideal temperature. With the help of an in-house beer ambassador, adults 21 and older can purchase a Budweiser Brew House card in the dollar amount of their choice, swipe the card at the tap wall, and watch as their chosen tap dispenses a perfectly chilled beer.

The Budweiser Brew House follows the opening of Budweiser’s EIGHTEEN|76 and the St. Louis Biergarten venues last year, which visually tell the story of Budweiser through authentic imagery and architectural elements. Designed by The Cordish Companies with Jeffrey Beers International, the interior of the Budweiser Brew House is inspired by Anheuser-Busch and Budweiser’s rich heritage and longstanding commitment to quality. For example, a rotunda on the second floor prominently features the signature crown of the King of Beers overhead, while one of the restaurant’s 11 bars is reminiscent of the famed Budweiser Clydesdales stable.

Tickets to access to the rooftop deck during St. Louis Cardinals games will be available to purchase through the Cardinals.

Every Friday at 5 p.m., beginning April 4, the Budweiser Brew House will serve as the backdrop for Fridays on Clark, a kickoff to the weekend that will be open to the public and include beer samplings and a variety of activities throughout the year. The first Fridays on Clark event will feature an appearance by the full Budweiser Clydesdale hitch.