By Newsroom on February 3, 2016Comments Off on Budweiser & Helen Mirren Put Drunk Driving on Notice in Super Bowl Ad

Budweiser is using the bright lights of advertising’s biggest stage—Super Bowl 50—to take on drunk driving in an unexpected, unorthodox and powerful way. To spark conversations about this vital issue on one of the biggest drinking occasions of the year, the brand has called upon actress Helen Mirren, with her mix of gravitas and charm, to demand that beer drinkers make a plan to get home safely.

“Simply Put,” Budweiser’s new 60-second spot by Anomaly, stands apart from the typical drunk driving PSA by forcefully calling out drivers to #GiveADamn and protect their lives and the lives of others, in a tone that only Mirren can deliver.

Budweiser and Anheuser-Busch have a strong and proud history of promoting responsible drinking over the past 30 years, and the “Simply Put” movement goes far beyond just advertising. To encourage fans to find safe rides home on game night, Budweiser created StandWithBud.com, which provides people with the most convenient transportation options based on their locations, from taxis to car services (including discount codes where permissible).

‘Stand With Bud’ also invites people to take a pledge to #GiveADamn and not drive drunk on Super Bowl Sunday, then share their commitment on social media using Mirren’s brazen tone.

For each use of campaign hashtag #GiveADamn through 11:59 p.m. ET on February 7, Budweiser will spend an additional $1 on safe ride home programs (up to $1 million) in 2016. The hashtag also triggers an eye-catching Twitter emoji that will facilitate additional shares of the campaign message. 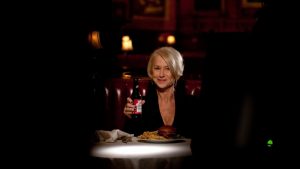 “We can all agree that driving drunk is a very bad idea, yet people still do it. If we’re able to make one person think twice and not get behind the wheel, then this campaign has done its job,” said Brian Perkins, vice president, Budweiser. “We care about our consumers, and we wanted to address the issue differently than anyone ever has before, in an effort to start as many conversations as possible and get people to make a plan.”

During the game, Budweiser will debut an additional 30-second spot by Anomaly titled “Not Backing Down,” which will unapologetically celebrate all the things that make Budweiser America’s No. 1 full-flavored lager.