By Newsroom on April 12, 2013Comments Off on Budweiser Introduces Football Phoneographers at FA Cup Semifinals 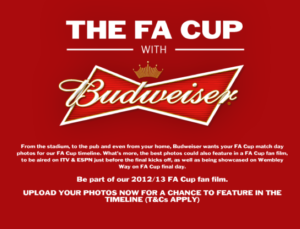 Smartphones will battle with long lenses at The FA Cup with Budweiser this weekend as, for the first time ever in football, some of the web’s best amateur photographers are given the same level of accreditation as their professional counterparts.

FA Cup sponsor Budweiser is making media history by selecting ‘Phoneographers’ – amateur photographers who shoot solely on smartphones – to become the tournament’s first official social reporters capturing, editing and sharing all the action from the Semi-Finals.

The initiative is helping to celebrate Budweiser’s fan film TV advert, which will tell the story of the 2012/13 FA Cup season from a fan’s perspective and continues Budweiser’s commitment to bringing The FA Cup closer to fans. The 120 second ad will air in the last commercial break before The FA Cup Final kicks off on 11 May 2013.

The lucky Phoneographers will shoot pitch-side alongside professional sports photographers, getting a perspective of the game that an amateur photographer can only dream about. 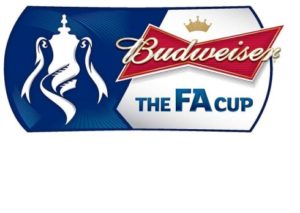 The appointment of the two social media photographers will not only satisfy the public’s appetite for exciting images, but also recognise the power of citizen journalism.

The Phoneographer’s images will be shared on Twitter under the hashtag #tothedream. Football fans can also Tweet their own FA Cup photographs by following @BudweiserUK and using #tothedream for the chance to have it appear in a Budweiser fan film TV advert, which will be played during The FA Cup with Budweiser final on 11 May.

We’re thrilled to be bringing these avid football and photography fans closer to the game they love in a way they can share with other fans in stadium and at home. It reflects the changing way people get their football updates and our desire to bring the magic of The FA Cup even closer to the fans, which social media certainly has the potential to do. We hope the Phoneographer’s shots will help celebrate the great moments from this season’s Semi-Finals and capture the optimism of fans hoping to see their team reach the Final in May.