By Newsroom on May 8, 2018Comments Off on Budweiser Kicks Off “Light Up the FIFA World Cup” Global Campaign

Budweiser, the Official Beer of the FIFA World Cup, unveiled its new global campaign, “Light Up the FIFA World Cup,” which encapsulates the unparalleled euphoric energy of the world’s biggest sporting event and Budweiser’s passion for energising fans as they watch and celebrate their favourite players, moments and teams throughout the tournament.

Major highlights of the campaign include global advertising featuring the largest beer delivery to date, the deployment of eight million noise-activated Red Light Cups that light up in response to fan cheering, and a variety of integrated experiential, digital and social programs launching in more than 50 countries.

“As the most watched sporting event on the planet, the FIFA World Cup is the ultimate opportunity for Budweiser, the world’s most enjoyed beer, to connect with billions of passionate football fans globally. Our campaign is the largest in our company’s history, and it demonstrates how we are bringing together fans from around the world over beer and their shared passion for football,” said Miguel Patricio, CMO, Anheuser-Busch InBev. “Our campaign captures the celebratory, upbeat and premium experience of the Budweiser brand and fans will continue to see this come to life through our ongoing activations for the 2018 FIFA World Cup.” 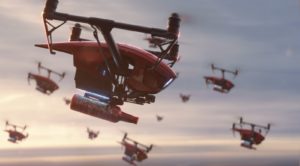 Budweiser’s global advertising campaign, “Light Up the FIFA World Cup,” highlights the most ambitious beer delivery ever through a variety of creative executions, including :15, :30 and :90 ads, that show how Budweiser is upping the energy levels of fan’s football celebrations worldwide as the Official Beer of the 2018 FIFA World Cup.

The commercial spotlights the journey of thousands of drones as they carry Budweiser from the St. Louis brewery and head for Moscow with the ultimate goal of delivering a stadium full of fans with their very own Budweiser. The spot culminates with fan cheers activating Budweiser’s Red Light Cups throughout the stadium, showing the energy and excitement of fans at the FIFA World Cup.

Additionally, the longer form :90 spot features the heroic adventure of Bud 1876, the underdog drone, overcoming a dramatic series of obstacles as it flies over multiple cities around the world – from Shanghai to Rio de Janeiro – to make a triumphant arrival at Luzhniki Stadium in Moscow. Bud 1876 delivers a Budweiser to the lone beer-less fan in the stadium, capping an emotional and euphoric journey to resonate with football fans around the world.

The advertising campaign will run in more than 50 countries around the world, across television and digital channels. Fans are encouraged to engage with the “Light Up the FIFA World Cup” campaign through Budweiser social channels. 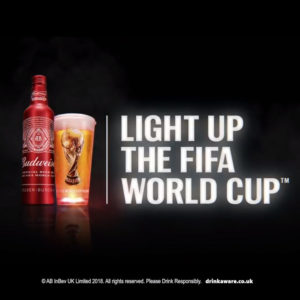 The true star of the “Light Up the FIFA World Cup” campaign is the Budweiser Red Light Cup which embodies and responds to the euphoric energy of fans watching the tournament. Unlike any other FIFA World Cup cup that has come before, the Budweiser Red Light Cups will be noise-activated, lighting up to visibly display fans’ excitement and energy with increased frequency as their cheering and clapping gets louder to match the action on the pitch.

More than eight million cups will light up in 50+ countries throughout the tournament. For fans in Russia, every beer purchased at official 2018 FIFA World Cup stadiums will be served in a Red Light Cup, and for fans around the world, the Red Light Cups will be featured at each of Budweiser’s global viewing parties and events and available with purchase of special Budweiser packs. There will be more than 70 variations of the cup, including cups for every match throughout the tournament and in a variety of languages.

Budweiser has a strong commitment to football globally, having served as official beer sponsor of the FIFA World Cup for over 25 years, and with an ongoing commitment through the 2018 and 2022 tournaments.

While Budweiser will serve as the official beer of the 2018 FIFA World Cup Russia, Anheuser-Busch InBev will leverage its high-quality portfolio of beers around the world by once again extending local sponsorship rights to its leading brands in select football markets, including, but not limited to, Brahma (Brazil), Harbin (China), Corona (Mexico), Jupiler (Belgium and The Netherlands), Klinskoe (Russia), Hasseröder (Germany) and Beck’s (Italy), among others.

Budweiser Kicks Off “Light Up the FIFA World Cup” Global Campaign added by Newsroom on May 8, 2018
View all posts by Newsroom →