Budweiser Launches Made by Fans in the UK

By Newsroom on June 15, 2016Comments Off on Budweiser Launches Made by Fans in the UK

Can the raw commitment, pride and passion of football fans be bottled? That’s exactly what Budweiser has done with its one-off Made by Fans brew, giving fans up and down the country the opportunity to infuse Budweiser with their die-hard support of English football. 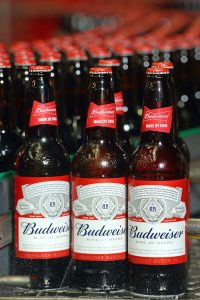 So how did Budweiser do it? A beer-filled Budweiser tanker was toured across the UK led by footballing legends Graeme Le Saux and John Barnes. The players met fans in locations across the country including London, Coventry and Preston, where they had the opportunity to sing and whistle to, as well as touch, the Budweiser tanker – literally filling the brew with their supporter pride and passion. Fans then added their personal signatures to the Budweiser beer tanker – creating the first-ever ‘Made by Fans’ batch of Budweiser.

The tanker then arrived at Budweiser’s UK brewery in Samlesbury, Lancashire, where the official England Supporters Band played patriotic tunes to the beer as it brewed, before the first bottle rolled off the production line on June 9.

Former England player Graeme Le Saux, said: “I couldn’t resist the opportunity to help Budweiser make the first ever beer infused with the pride, passion and commitment of the country’s football fans. I know first-hand just how powerful fan passion can be – it helped spur me on many a time throughout my career. I felt that passion again meeting thousands of football supporters across the country who helped instill their passion into this first-ever Made by Fans football brew by Budweiser. I’ve heard many people say ‘imagine if you could bottle the passion of English fans’ over the years. Well now, finally, we have.” 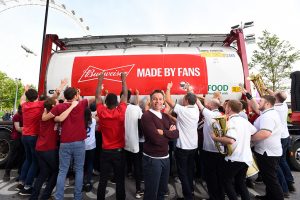 Aina Fuller, Senior Brand Manager at Budweiser UK, says of the campaign: “We wanted to create Budweiser Made by Fans to honour football fans up and down the country and to do something truly special to celebrate the upcoming summer of sport. This one-off batch of Budweiser really is made by the fans, for the fans; passion is what makes our brew unique, and passion is what makes a true fan too. Budweiser Made by Fans is crafted to recognise and reward this unwavering fan commitment, and we hope all the supporters out there enjoy it as much as we enjoyed brewing it.”

To get your hands on the limited edition brew, Budweiser will be surprising and delighting consumers with exclusive ‘Made by Fans’ giveaways on its social channels throughout the summer of sport starting from Monday 13 June – join in the conversation using #ThisBudsForYou.

Budweiser Launches Made by Fans in the UK added by Newsroom on June 15, 2016
View all posts by Newsroom →