By Newsroom on February 28, 2018Comments Off on Budweiser Succeeds Carlsberg as Official Beer of England Football Team 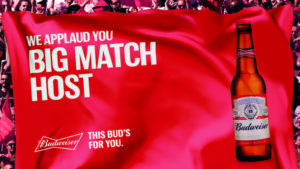 Budweiser, is to replace Carlsberg as the official beer partner for the England men’s national team, marking the biggest deal in the Football Association’s (FA) history.

As well as teaming up with the national side, the Anheuser-Busch-owned brand will take over the taps at Wembley Stadium. The move will further deepen Bud’s ties to the the sport, with it also renewing its partnership with the FA Cup which has been in place since 2015.

Carlsberg called time on its 22-year sponsorship of the national team recently, explaining that it wanted to shift its focus on to live events and other sporting events.

Budweiser will take on the sponsorship from the start of the 2018/19 seasons, with the FA saying the advertiser has agreed to play an active role investing in grassroots football initiatives.

The deal also includes significant investment to upgrade the fan experience at Wembley Stadium, with AB InBev saying it will serve up premium brands from its portfolio on match days. 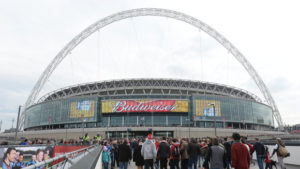 The move is likely to help boost Budweiser’s growing popularity among UK drinkers, with sales for the most recent financial year up 15%, £49.2m in 2016.

Jason Warner, president, North Europe at AB InBev, said the brand was pleased to strenghten its ties to football and tap into some of the “nation’s biggest cultural moments” through the partnership.

“A trip to see England play at Wembley Stadium is an unforgettable experience, so we are delighted to help the bars at Wembley Stadium amplify it even further, both through Budweiser and the power of our brands from our premium AB InBev portfolio. We are also proud that all profits will go into nurturing the future Harry Kanes and Raheem Sterlings, as well as supporting grassroots initiatives.”

Budweiser said that since 2012 it has invested over £1.3m directly into English football through schemes like the Budweiser Club Futures programme, which makes a grant each year to a grassroots football club competing in the FA Cup. 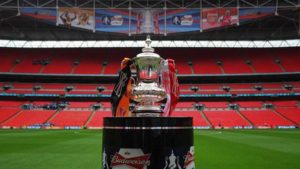 Danish beer brand Carlsberg decided to end its sponsorship less than a year after it funnelled £15m into a glossy advertising overhaul which sought to position it as a premium product, but has said the sport will still be important to its mix.

Commenting on the Budweiser deal, Mark Bullingham, the FA’s commercial and marketing director, said: “Budweiser has been a great long-term partner across many different parts of football, so we’re delighted with this new, bigger partnership that will take support for the game and entertainment for the fans to the next level.”

He added that it was the largest official beer partnership deal that the FA has ever inked.

“Our relationship with our current beer partner for the England Team comes to its contractual end after this summer’s World Cup and I would like to thank them for its support and contribution over our 22-year partnership,” he asserted.

Budweiser Succeeds Carlsberg as Official Beer of England Football Team added by Newsroom on February 28, 2018
View all posts by Newsroom →