By Newsroom on December 6, 2016Comments Off on Budweiser Team with Uber to Launch its Biggest Ever Responsible Drinking Push 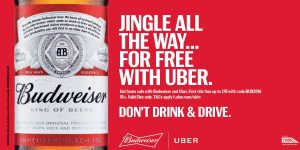 In its biggest ever UK responsible drinking campaign, Budweiser has launched a partnership with Uber to offer free rides to all its new users throughout December – helping people plan ahead for their Christmas journeys home.

In a bid to help the nation get home safe this festive season, the partnership is part of a wider 360-activation that draws a hard line on drink driving, and encourages people to pre-plan their journeys home this Christmas.

The campaign also features the UK television debut of Budweiser’s famous and unorthodox Helen Mirren ad, which featured in the Super Bowl in 2016. The national TVC stars the Oscar-winning British actress in a 60-second advert, delivering a straight-talking, uncensored and powerful responsible drinking message to UK viewers in a way that only Helen Mirren could – making no excuses for drink drivers.

Budweiser and Uber have partnered with the Department for Transport, in support of their THINK! Christmas drink driving campaign.

Budweiser’s advert will launch across Sky channels and in cinema from 1st – 31stDecember 2016, as well as digital platforms including Snapchat and Facebook from 5th December. Budweiser will also be launching over 3,500 OOH advertising sites across the UK to support the advert.

As a special gift to the nation, Budweiser and Uber will also be revealing an additional element to the campaign in the final countdown to Christmas – aimed specifically at reducing drink driving on Christmas Eve. Watch this space.

Steph Okell, Marketing Manager, Budweiser UK, says: “Despite all the reasons not to, people are still drinking and driving. This Christmas Budweiser is communicating in a bold, new way to put a stop to that. Our Helen Mirren advert addresses the issue of drink driving in a straight-talking, unconventional tone: a wake-up call to start as many conversations as possible and get people to plan their journey home during the biggest party season of the year. As an iconic global beer brand, Budweiser is using its gravitas in the fight against drink driving and we’re proud to partner with Uber to offer people a free ride and ensure they get home safely this Christmas.”

Jo Bertram, Regional General Manager of Uber in the UK, said: “There’s no excuse for drink driving and with new options like Uber people can now get a safe, reliable and affordable ride home at the tap of a button. Through this campaign with Budweiser we’re looking forward to helping more people get home safely this Christmas.”

To get the offer, new users simply have to download the Uber app and enter BUD2016 in to the ‘promotions’ function.

Budweiser Team with Uber to Launch its Biggest Ever Responsible Drinking Push added by Newsroom on December 6, 2016
View all posts by Newsroom →