By Newsroom on October 1, 2014Comments Off on Budweiser Unveils Limited Edition NFL Pack 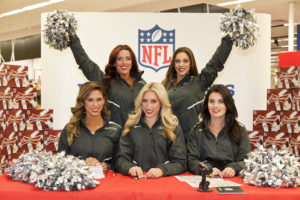 Budweiser has announced the launch of a limited edition on-pack promotion to celebrate its NFL partnership ahead of an exciting series of games scheduled at Wembley Stadium.

The 20x300ml NFL themed pack will give shoppers the chance to win NFL diamond hospitality tickets, as well as official NFL merchandise. Through the promotion fans can scan their pack to be in with a chance of winning tickets to Detroit Lions vs. Atlanta Falcons on 26th October, or Dallas Cowboys vs. Jacksonville Jaguars on 9th November.

The packs are available in Tesco stores nationwide in the UK.

To help launch the promotion, cheerleaders from the Oakland Raiders visited Tesco stores in Twickenham and Milton Keynes, performing routines in the aisles and posing for photographs with shoppers.

This promotion builds on strong fan interest and the NFL’s commitment to bring more games to London.  Budweiser also continues to successfully utilise the scan-to-win mechanic, following on from its 2014 FIFA World Cup promotion earlier this year which gave fans the opportunity to win tickets to the tournament. 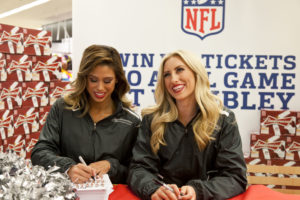 Budweiser will also be present at the pre-game tailgate events at Wembley Stadium on match days and will available to fans inside the stadium.

“We think nothing goes together better than a great sporting match and a cold beer so we’re thrilled to be partnering with the NFL to create amazing experiences for our consumers. This exclusive on-pack promotion is just part of our commitment to bringing fans closer to the games they love.”