By Newsroom on March 6, 2018Comments Off on Burger King is Looking to Hire Pyromaniacs in New Campaign by Grabarz & Partner 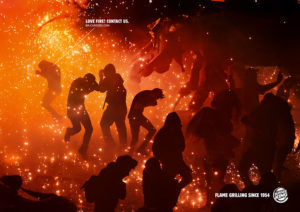 Burger King has a message for young people in Germany who like to play with fire: Apply for a job today!

The fast-food chain that never shows any fear of getting burned turns up the heat once again in its latest campaign. A series of print and out-of-home ads by Hamburg’s Grabarz & Partner capture visually striking moments of passion, pageantry and protest around the world that were all made possibly by man’s unending efforts to tame the flames. 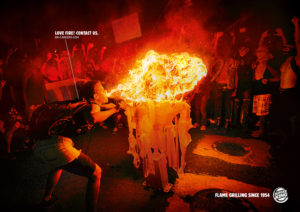 The campaign almost feels like photojournalism. The subjects of the images include soccer fans brandishing their Bengal lights; a fire festival in Valencia, Spain; a flame-breather demanding improved living conditions in Brazil; and a masked anti-globalist armed with a classic Molotov cocktail.

The ads direct readers to bk-careers.com, which redirects to BK Germany’s jobs page.

Yet, while the campaign looks to establish the chain as an edgy employer, it all goes back to those burgers. 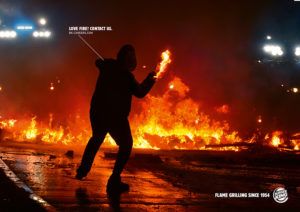 “Burger King is all about flame grilling,” Grabarz & Partner art director Matthias Preuss and copywriter Kai Reuther told AdWeek. “This is also the main difference from our competitors, and therefore it should be part of every communication—especially when it comes to a recruitment campaign. Since Burger King is active in a highly competitive market, we have to be bold and stand out to get new employees.”

The fact that some of these images are heavily politicised is no accident. “We wanted to choose relevant topics for younger people; that’s why we came up with these [themes],” Preuss and Reuther say. “In addition, picking up polarising [themes] result in more attention for our campaign.” 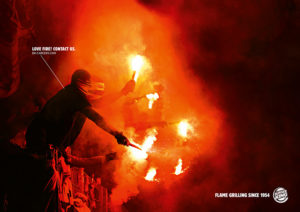 Asked whether the new effort was inspired by or tied to last year’s work, the creatives said: “Yes and no. Yes, because the campaign follows a Burger King tradition of going to places that other advertisers wouldn’t touch. And no, because this is a recruitment campaign. The thing that unites both campaigns [is] fire, and a unique and bold way to communicate.”

The work will appear on a series of billboards near prominent landmarks, with full-page print ads running in top German pop culture publications like 11 Freunde, Musikexpress and “heavy metal bible” Metal Hammer.

Burger King is Looking to Hire Pyromaniacs in New Campaign by Grabarz & Partner added by Newsroom on March 6, 2018
View all posts by Newsroom →