By Newsroom on November 16, 2018Comments Off on Burger King Makes Other Brands Pay for Your Whopper in Black Friday Banner Campaign

Burger King is hijacking the biggest shopping week of the year by making other brands buy fans a Whopper sandwich through a new web portal. 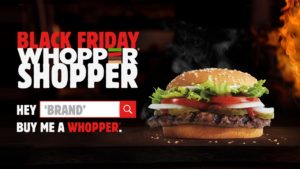 Whopper Shopper is a new website from the BK brand that only features online banner ads from other brands so that they can be the ones to pay for people’s Whopper sandwiches.

According to a video by the burger chain, it works by turning the traditional banner click on its head. Normally, when a shopper clicks a banner on a website and buys something from a brand, the owner of the website gets a percentage of the sale from that brand. 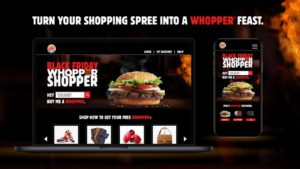 But with Whopper-Shopper.com, each time somebody clicks on one of the banner ads and purchases something, the company pays Burger King money – money that BK will give back to its guests in Whopper sandwich vouchers.

The website and promo will be up through Cyber Monday on 26 November, while supplies last for US residents only. Due to an anticipated high demand there will be a limit of three Whopper vouchers per eligible participant. The vouchers will be sent after the end of the promotion.

Burger King Makes Other Brands Pay for Your Whopper in Black Friday Banner Campaign added by Newsroom on November 16, 2018
View all posts by Newsroom →