By Newsroom on March 1, 2016Comments Off on Burger King Responds to McDonald’s Sassy Ad Insulting its Drive-Thrus 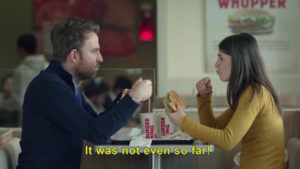 It looks like the latter isn’t going down without a fight though–and with humour. The fast food chain has teamed up with agency Buzzman to create this amusing spot in response to the Golden Arches.

The message is simple–fewer drive-thrus? No problem, because loyal Burger King fans wouldn’t mind going the extra mile for their Whopper.

Burger King Responds to McDonald’s Sassy Ad Insulting its Drive-Thrus added by Newsroom on March 1, 2016
View all posts by Newsroom →