Cadbury is looking to breathe new life into Milk Tray with the launch of an ad campaign to find a new ‘Milk Tray Man’ the popular James Bond-style character that last starred in the brand’s ads 13 years ago.

Debuting on screens October 9 with a 30-second TV ad by Fallon, the £4m multiplatform campaign forms part of Milk Tray’s 100th anniversary. The spot stars a former Milk Tray Man, actor James Coombes, as he kicks off the UK-wide search for the brand’s latest ‘Man in Black’.

Set at a British secret spy headquarters, the ad first drops within ITV’s The Chase, and shows Coombs explaining the old adverts which saw the Milk Tray Man leaping from cliffs and traversing shark infested waters to deliver his lover a box of the chocolates.

Speaking to The Drum Tony Bilsborough, head of external communications at Cadbury owner Mondelez, said the campaign has two objectives: to remind consumers of what a “powerful and famous brand” Milk Tray is but also to try and change the way consumers think about the Milk Tray Man to line-up with Cadbury’s aim of shifting perception of the chocolate assortment from a last minute present to a thoughtful gift. 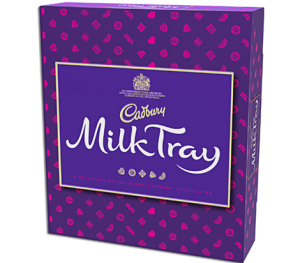 “The centenary is the perfect timing to announce the return of the Milk Tray Man and the brand itself is still very popular – it’s the most popular assortment on the market. The concept of gifting is still with us and in many respects has grown so before where Milk Tray would simply have been a box of chocolates given by a man or boyfriend to his lover, thoughtful gifting is so much wider and there is a need to reflect that with a new Milk Tray Man.”

The competition is open to all types of men, not just “squared-jawed models”, and Cadbury is particularly looking for men who can display a level of “thoughtfulness”. Entries are open until the end of the year with the winner set to be announced early 2016, after which Cadbury will launch a range of executions starring the new Milk Tray Man.

“This is certainly the biggest campaign to support Milk Tray in two decades, and this is huge support for a brand that remains very popular,” said Bilsborough. “[But] this isn’t about rolling out a new TV ad with a new ‘Man in Black’, although we’ve done that before, it’s about having fun with the campaign and engaging with the public in a number of ways.”

The six-week long campaign will span social, PR, out of home and cinema and a new packaging design and updated selection of chocolates has also been introduced. One factor that still remains however is the advert’s famous tag line, ‘All because the lady loves Milk Tray’.

“Milk Tray has changed, if you look at the units and the packaging of course it’s been updated for a modern generation, but there are certain icons that you want to retain and ‘All because the lady loves Milk Tray’ resonates and it’s time to bring that to a new generation and a new Milk Tray Man.”

The campaign will supported by a range of agencies including Golin, Elvis, PHD, Gravity Road and RPM.