By Newsroom on November 20, 2015Comments Off on Cadbury’s Australian Crowd-Coloured Animation is a Visual Treat

Cadbury and SapientNitro recently unveil the Australian Crowd-Coloured Short Film, the culmination of a 4-week collaborative digital initiative. Based on an original creative concept by SapientNitro and facilitated via an innovative digital interface, this initiative forms part of the Cadbury Dairy Milk Marvellous Creations campaign encouraging people to come together to ignite the party spirit.

Over the past month, Cadbury Dairy Milk Marvellous Creations has been giving Australians the opportunity to be involved in the making of an animated film. Everyone was invited into the process, going behind the scenes to collaborate with each other and professionals in the world of animation.

During the participation phase, creators could visit the campaign website and use a unique, custom designed digital painting tool. Using this tool, they could unleash their creativity on one of the 1,500 unique frames that make up the 2-minute film. 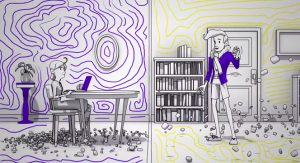 SapientNitro worked with animation company Flutter to create the short film and outline the individual frames for everyone to colour.

Since submissions closed, the animators have worked through the thousands of submissions, hand picking the most marvellous frames. The film, which premiers nationally on YouTube and Facebook, showcases these featured submissions, all of which are named in the credits.

This digitally lead campaign was about connecting with Cadbury’s active social audience in a meaningful way and creating opportunities to drive sharing. At the same time, building new brand associations beyond traditional channels in the minds of consumers and collective culture.

Chris Shoolman, Associate Creative Director at SapientNitro believes, “What better way to create something memorable than by inviting the public to come together and play a leading role in creating a film? The Australian Crowd-Coloured Short Film is testament to what can be achieved when technology and story meet.”

According to Paul Chatfield, Associate Director Marketing Chocolate, “We gave the public control and expression through colour. We are delighted with the final film and how this co-created content has come together .”

Cadbury’s Australian Crowd-Coloured Animation is a Visual Treat added by Newsroom on November 20, 2015
View all posts by Newsroom →