By Newsroom on June 25, 2014Comments Off on Capital Cities, Aloe Blacc Take Over Beck’s Beer Bottles 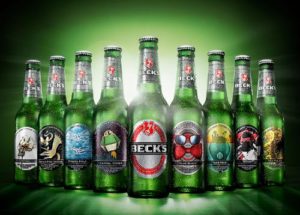 In addition to Capital Cities and Aloe Blacc, 2014 participants include:

“Live Beyond Labels participants tend to be drawn to the idea of reaching millions of people in an entirely new way,” said Ryan Garcia, vice president, regional marketing. “The size of their audience and their creative focus differs from artist to artist. But they all share an independent streak, a fearlessness Beck’s admires.”

Every year for the past 27 years, Beck’s Beer commissions original artwork for the summer-long Live Beyond Labels series. The brand replaces its traditional labels with the original designs from both emerging and established artists.

Throughout the life of the program, Beck’s labels have showcased original designs from a range of creative celebrities, including Andy Warhol, Jeff Koons, Damien Hirst, Yoko Ono, MIA and Kid Cudi. The program began in the UK and moved to the US in 2012.

One reason for the program’s popularity is its disruptiveness. Beer drinkers do not traditionally find original artwork on the side of a bottle of beer, let alone designs created by musicians, DJs and “guerilla gardeners.” In its history, the program has placed original art on more than 500 million bottles of Beck’s beer.

The 2014 roster of participants includes musicians, a DJ, a visual artist, a renegade gardener and a lowbrow artist:

Live Beyond Labels is intended to celebrate the fact that design is everywhere. The program intends to transform the traditional into the exceptional, by giving creative people an opportunity to treat millions of Beck’s beer bottles as a non-traditional artistic canvas.