By Newsroom on April 29, 2016Comments Off on Carlsberg Teams with Matchpint for Uefa Euro 2016 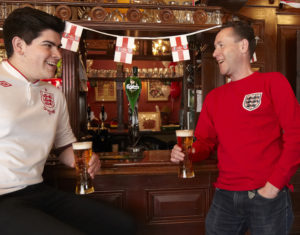 Carlsberg has partnered with the UK’s number one pub-finder for sports fans – MatchPint, to help drive consumers to the nation’s pubs and bars during this summer’s UEFA EURO 2016 tournament.

As Official Beer of the tournament and the England team, Carlsberg will give free-trade publicans the opportunity to receive a free three-month trial of the online and mobile-app service, that connects pub-goers with venues showing televised sport, saving them £60 in subscription fees if they sign-up before 10 June.

Consumers using the app can take advantage of offers, including a 2 for 1 deal on Carlsberg, allowing them to receive a free pint for their mate by checking in to participating outlets throughout the tournament. Prizes such as football tickets and limited edition England merchandise will also be up for grabs. The exclusive deal aims to inspire sports fans to watch the games in-venue, rather than at home – encouraging increased spend and repeat visits to pubs signed-up to the service.

David Scott, Marketing Director at Carlsberg UK, commented: “We’re firm believers that pubs and bars are the best place to watch live sport, and sporting occasions don’t come much bigger than UEFA EURO 2016. With England, Wales, Northern Ireland and the Republic of Ireland all set to compete, the tournament represents huge opportunities for licensees.

“We know that MatchPint reaches 270,000 sports fans each month via the app and website, and through this partnership and our wider campaign, we are committed to help the on-trade create the most successful tournament possible.”

Dominic Collingwood, Co-founder of MatchPint, commented: “Not even Leicester City winning the Premier League title can beat international football for excitement. This summer, both football fans and football flirts alike will be in search of the best places to watch the drama unfold – including the inevitable exit on penalties! Carlsberg UK share our passion and understanding for delivering great sports experiences in pubs. We’re delighted that through this partnership, we will be increasing footfall in pubs and delivering the ultimate football experience for fans across the country.”

Carlsberg is also supporting the on-trade with 10,000 PoS kits, as part of the brand’s wider integrated communications campaign for the tournament – which encompasses trade activation, broadcast activity, stunts and consumer giveaways.

Carlsberg Teams with Matchpint for Uefa Euro 2016 added by Newsroom on April 29, 2016
View all posts by Newsroom →