By Newsroom on June 7, 2016Comments Off on Carlsberg UK’s Three Lions Ale Hits the Bar During Uefa Euro 2016 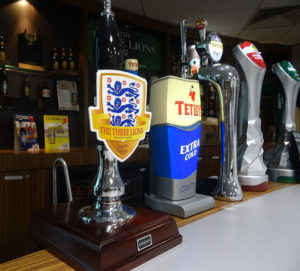 Carlsberg UK has launched ‘Three Lions Ale’ for Uefa Euro 2016, as the brewer continues its support for the nation’s pubs and bars this summer.

The 4.1% ABV golden ale will be available for the duration of the tournament and is supported with a bespoke pump clip featuring the England team’s official three lions emblem, behind a golden scroll reading ‘The Three Lions’.

Liam Newton, Vice President Marketing for Carlsberg UK, said: “Three Lions Ale is one of the many ways we’re helping pubs and bars to capitalise on the optimism and excitement of the nation, in the build-up to and throughout the tournament. If publicans want a talking point on the bar then this is the ale for them.”

Carlsberg is putting pubs at the heart of its Official Beer sponsorship of Uefa Euro 2016 and the England team, and recently launched a new online film set in a pub, titled ‘Substitute Pessimism for Optimism’, which encourages England fans to get behind the national team.