By Newsroom on September 25, 2013Comments Off on Clover Set For Brand Revamp to Spark Sales 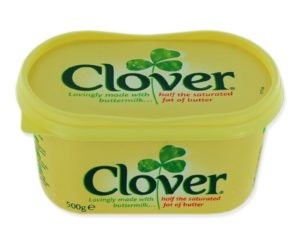 Dairy Crest is poised to refresh the packaging for its Clover brand as part of wider marketing strategy to grow its share of the fiercely competitive butters and spreads market.

The spread brand has struggled of late with the rise of own label variants, higher input costs and more health conscious consumers pushing sales down 2.9 per cent to £98.8m for the 52 weeks to July 2013 according to IRI Worldwide. Dairy Crest, however, recently said Clover sales were “broadly unchanged” for the six months to 30 September.

The business declined to give details on the brand revamp, however, several trademarks for new designs reveal it could eschew its “Churned like butter…half the saturated fat” strapline from packs to emphasise its logo. Dairy Crest is also looking to update the packaging for the brand’s lower calorie variant Clover Lighter alongside the launch of a potential new Clover Additions range.

Clover’s packaging revamp comes just weeks after rival Flora brought back its iconic sunflower logo in a £12m marketing push. Unilever is hoping the multi-million push can pique the interest of health-conscious shoppers after admitting earlier this year it had not done enough to market its Flora and Bertoli brands in this way.

Dairy Crest has ramped up its marketing in recent months following the revival of its Country Life Buttermen characters for the first time in more than a decade. The dairy maker is seeking greater collaboration from retailers to go beyond price-led marketing strategies and inject more creativity into its shopper marketing campaigns.

Additionally, it set up a R&D centre earlier in September to spearhead its plans of achieving 10 per cent of year-on-year growth from new product development.

Clover Set For Brand Revamp to Spark Sales added by Newsroom on September 25, 2013
View all posts by Newsroom →