By Newsroom on September 14, 2017Comments Off on Coca-Cola Australia Changes Branding to Say ‘Yes’ to Marriage Equality 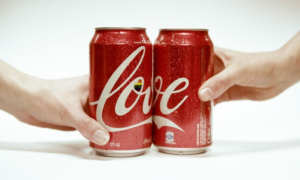 Coca-Cola has started a campaign to say ‘yes’ to marriage equality in Australia in the lead up to the postal survey. The company has re-designed its cans to say ‘love’ instead of the traditional ‘Coca-Cola’ branding.

Created by Ogilvy Sydney, the company has also revamped its iconic Kings Cross billboard to say “We say yes to love”.

The billboard is accompanied by a rainbow painted coke bottle positioned in front of a collage of ‘yes’ graphics. 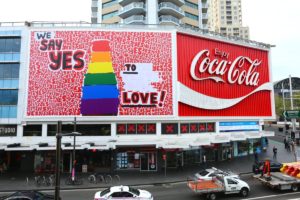 “We believe everyone deserves love, that’s why we are very proud to have worked on and be part of this campaign with Coca-Cola and to say YES to marriage equality in Australia.”

Coca-Cola Australia Changes Branding to Say ‘Yes’ to Marriage Equality added by Newsroom on September 14, 2017
View all posts by Newsroom →