By Newsroom on November 9, 2012Comments Off on Coca-Cola Begins the Christmas Countdown 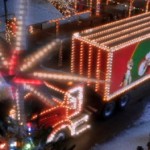 Coca­‐Cola Great Britain is announcing its latest Christmas campaign to help spread festive cheer and happiness to consumers across the UK. The seasonal favourite ‘Holidays are Coming’ TVC will form part of an integrated marketing campaign, with Twitter and Facebook helping to build anticipation as the unofficial countdown to Christmas begins.

Before the famous ‘Holidays are Coming’ TVC breaks during the X Factor on 10th November, Coca‐Cola will be tapping into consumers’ love for the truck by running teasers, quizzes and polls across social media to generate buzz and excitement amongst fans. Further engagement will also be encouraged through the introduction of the #holidaysarecoming hash tag to the family favourite ad.

Building on the success of previous years, the Coca­‐Cola Christmas Truck Tour is back, surprising millions of consumers across the country with an opportunity to have their picture taken with the famous truck. Bringing to life the iconic star of the ads, the truck will make more than 60 stops nationwide tour across towns, cities and supermarkets in Great Britain and Ireland. A dedicated hub will also be set up on www.cokezone.co.uk, highlighting where the truck will be as well as offering the opportunity to get involved through rewards schemes and competitions.

This year will also see Coca‐Cola recognise local heroes, appointed following nominations from their local communities. The brand will then be spreading further festive cheer with the iconic truck delivering the ultimate Christmas experience to all four winners homes, when the truck visits their local area.

In true Coca‐Cola Christmas tradition, the famous Sundblom designed Santa will be adding a festive presence to packaging across both Coca‐Cola and Diet Coke 2L bottles, 330ml cans and multipacks. The world famous Piccadilly Sign will also spread further Christmas magic, playing the ‘Holidays are Coming’ TVC to shoppers, couples and friends as they pass through the area.

Zoe Howorth, Marketing Director for Coca‐Cola Great Britain explains: ”Coca­‐Cola has a rich history of spreading Christmas joy through our marketing campaigns, with our ‘Holidays are Coming’ ad and truck which are loved across the world. We’re excited to be joining together with consumers in the countdown to Christmas and sprinkling some Coca‐Cola Christmas magic, harnessing both the brand’s heritage and core media platforms to spread some festive cheer.”

The Coca‐Cola brand has become synonymous with Christmas since launching in 1931, when Haddon Sundblom created the world­‐renowned image of ‘Coca-­Cola Santa’. This captivating festive holiday icon still resonates with consumers and helps propel consumers into a celebratory mood.

Coca-Cola Begins the Christmas Countdown added by Newsroom on November 9, 2012
View all posts by Newsroom →